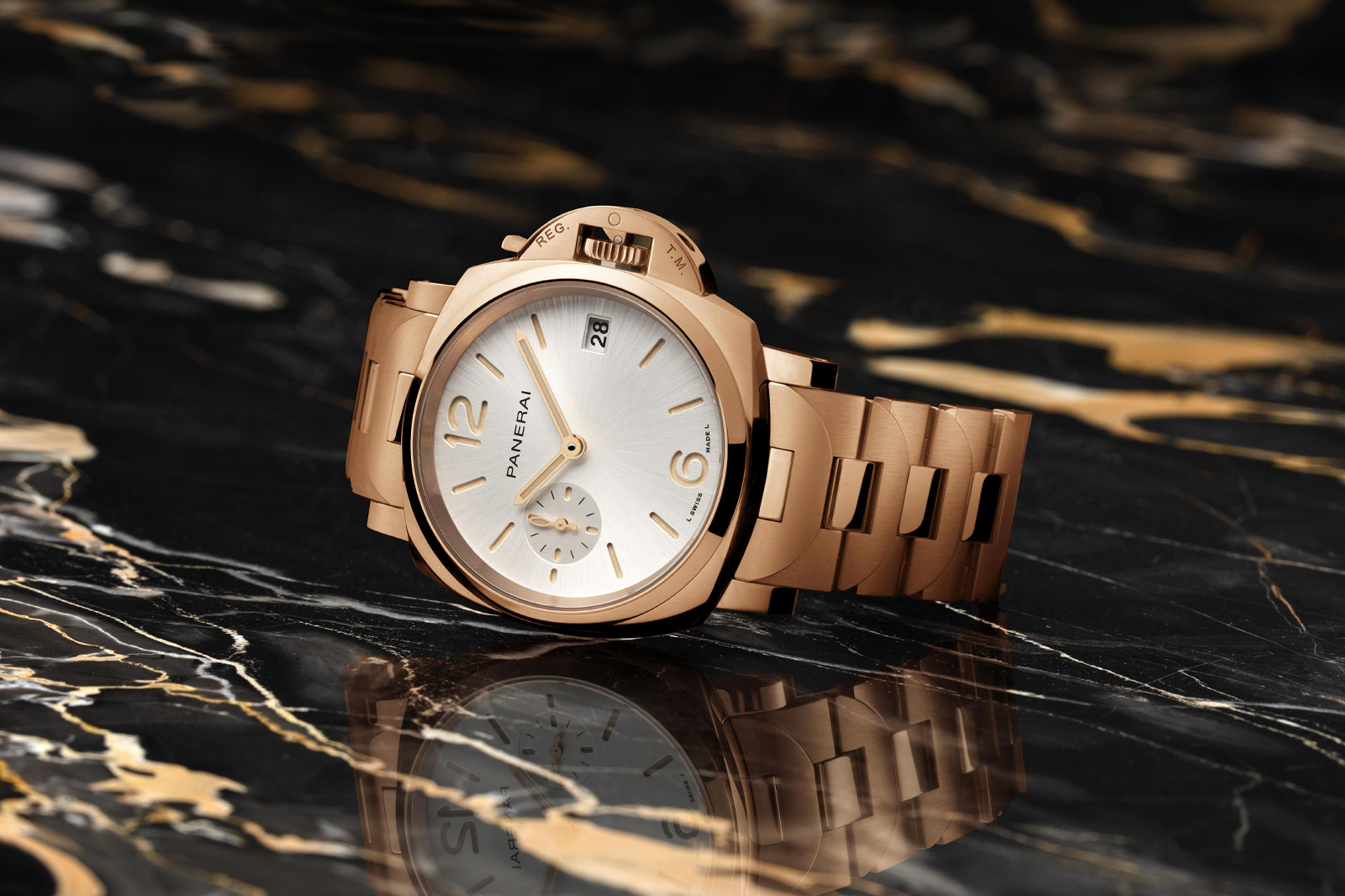 While their military diving heritage is perhaps best expressed in big, rugged pieces from the Submersible line, Panerai aren’t complete strangers to elegance and contemporary design with the Luminor Due collection providing an outlet for their more refined watches. Now, they’ve launched the Panerai Luminor Due TuttoOro, introducing gold bracelets to the collection for the first time. 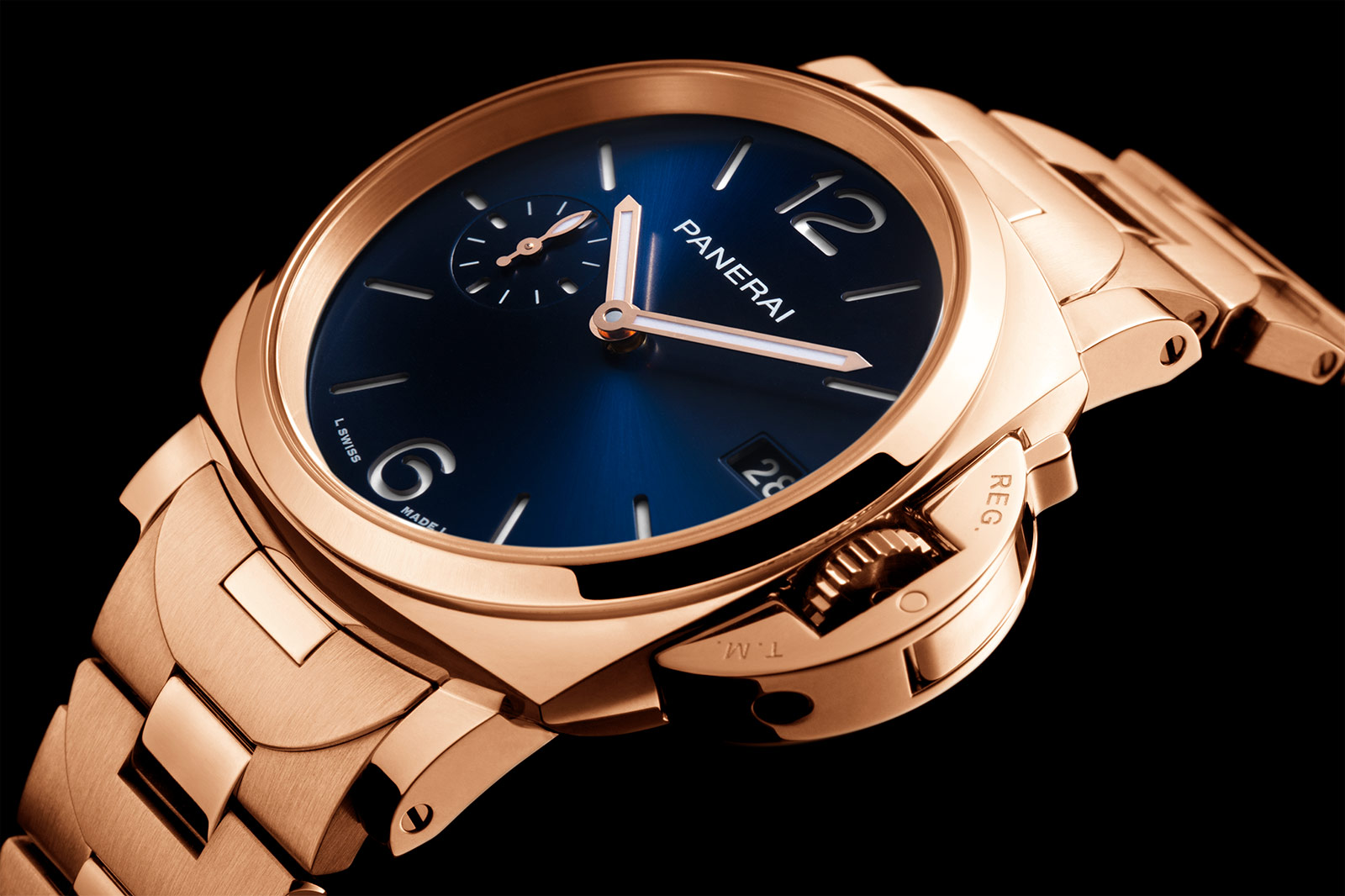 The Luminor Due TuttoOro has a 38mm diameter case with Panerai’s signature cushion design and pronounced crown protector. It’s made from Goldtech™, Panerai’s proprietary gold alloy that features high amounts of copper as well as some platinum, creating a strong red colour with a high shine. And just in case you were to think, “it’s a Panerai and Panerai make divers”, don’t push your luck as the TuttoOro only has a water resistance rating of 30m. 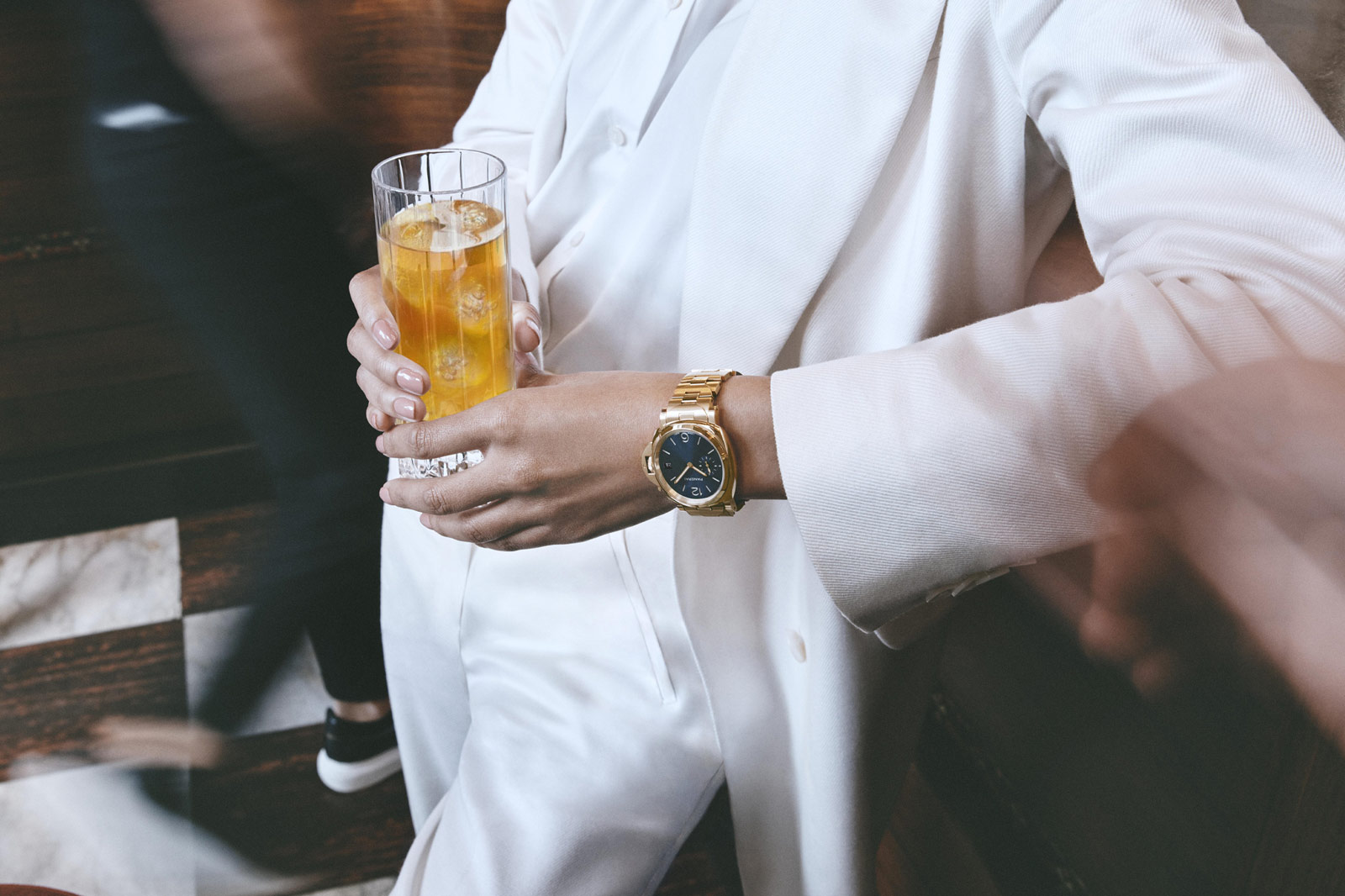 As for the dial, there are two colours available. The white, sun brushed Ref. PAM01326 is available in all the usual places, including online, but the deep blue Ref. PAM01182 is a boutique exclusive. A really nice touch is the fact that the date window at 3 o’clock has been customised to match the colourway of the dial, a small aspect of design that often gets overlooked, really showing Panerai’s attention to detail. 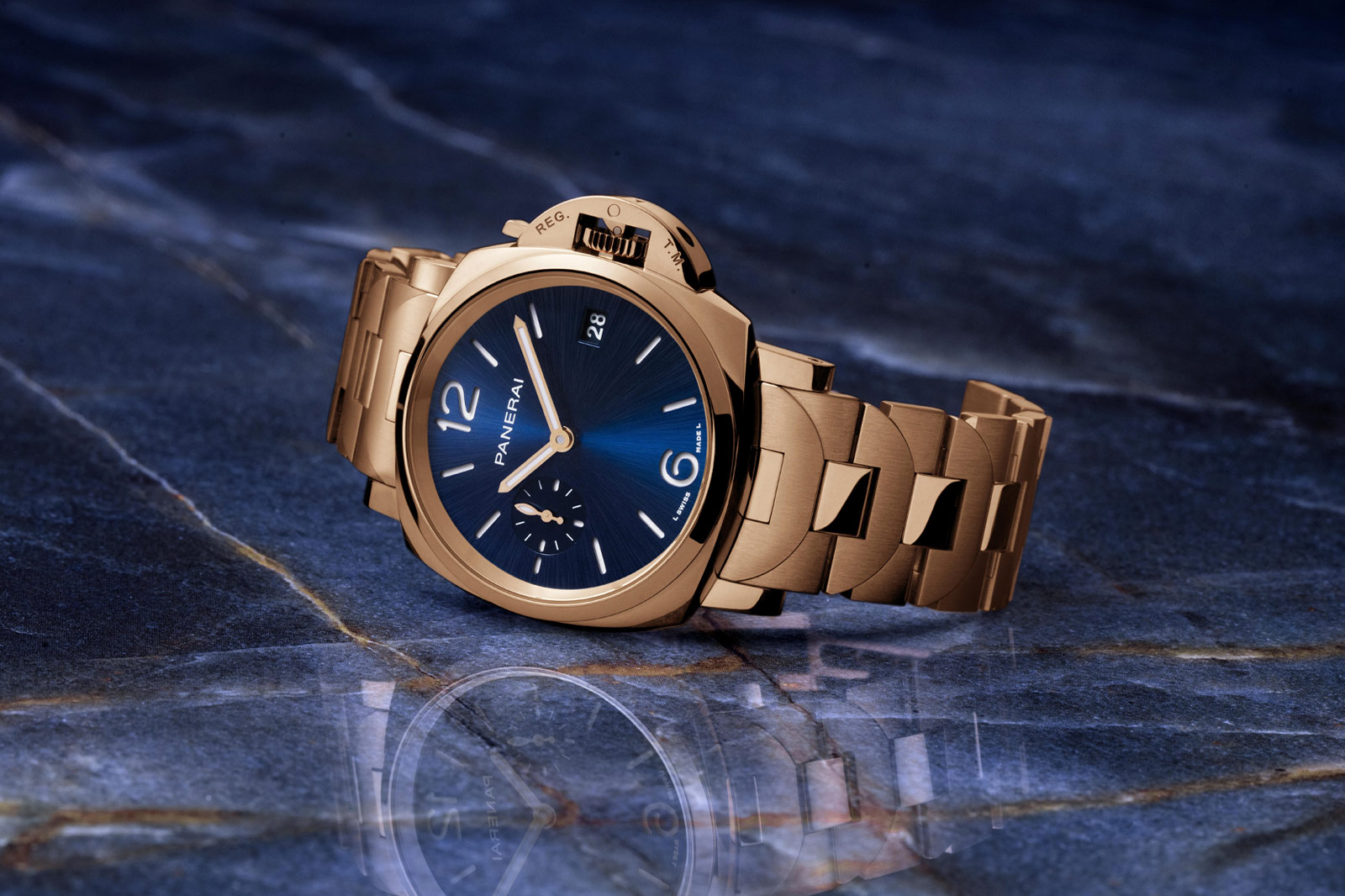 Of course, one of the most significant elements of the Panerai Luminor Due TuttoOro is its new bracelet. Just like the case, it’s made from Goldtech™, giving it a rich and attractive colour. It follows the shape and style of Panerai’s existing bracelets with that distinctive semi-circular link design. A gold Panerai bracelet is the kind of thing that we didn’t know we needed, but we do. 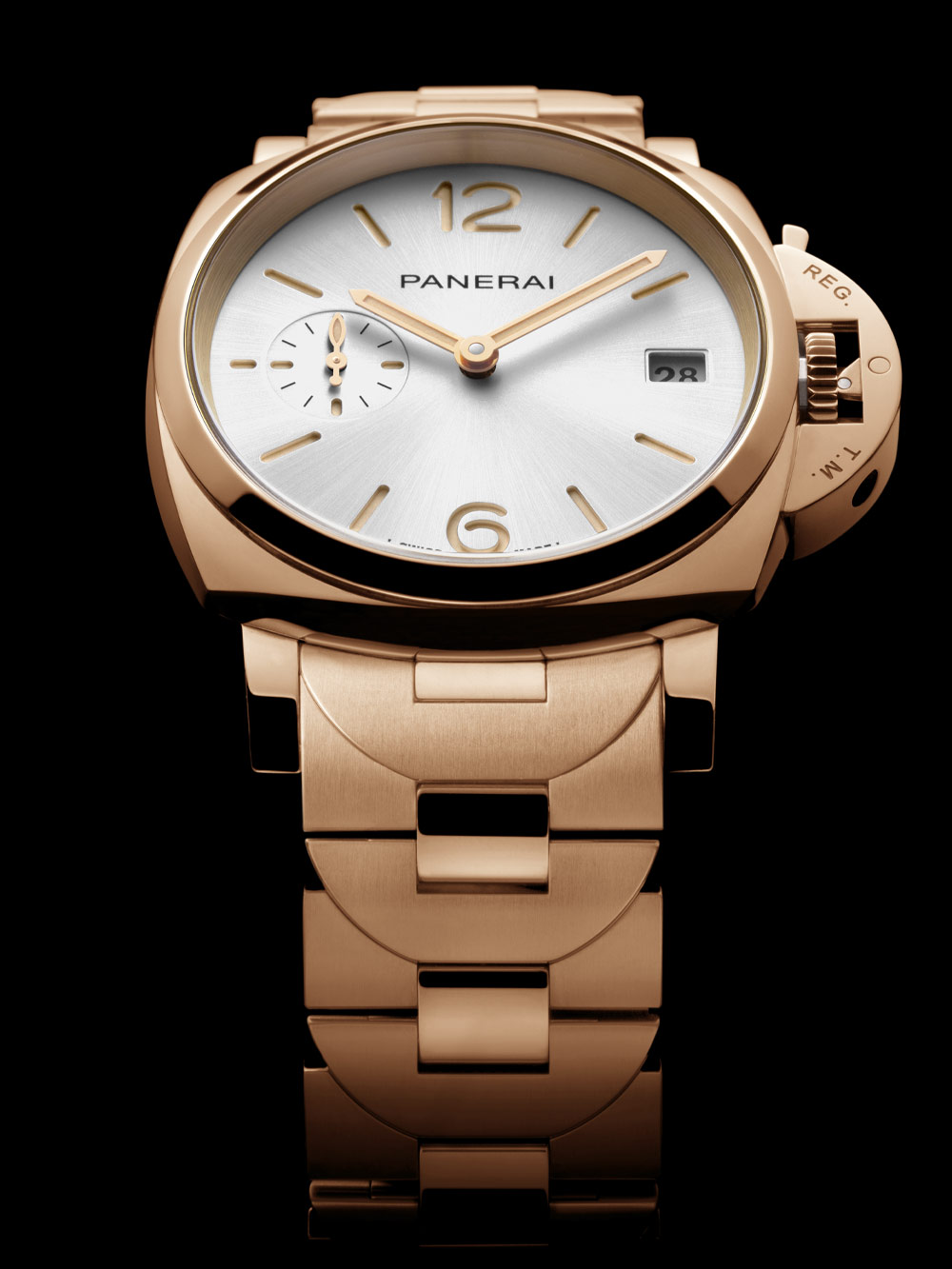 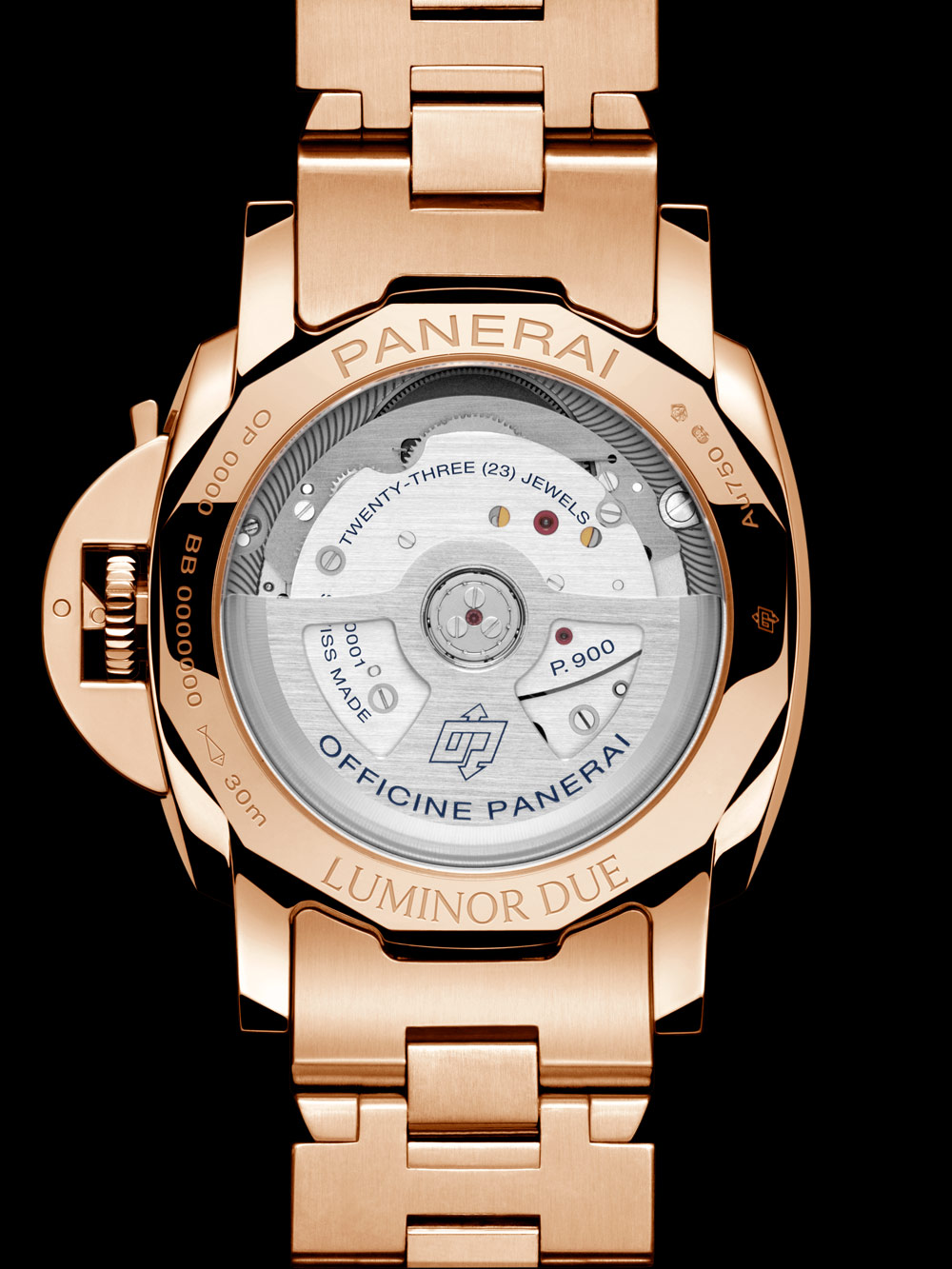 Like the majority of Panerai Luminor Due models, the TuttoOro houses the calibre P.900, an automatic movement with a power reserve of 72-hours. It’s also equipped with all of Panerai’s usual adventure-proofing devices such as the Incabloc® anti-shock system. Although in a similar situation to the water resistance, avoiding shocks in the first place is the way to go. The Panerai Luminor Due TuttoOro is priced at £31,100 for both colourways. That makes it almost double the price of standard Goldtech™ models with alternative straps. However, it’s not the most expensive Luminor Due, despite the addition of the precious metal bracelet: that title is maintained by the platinum edition.