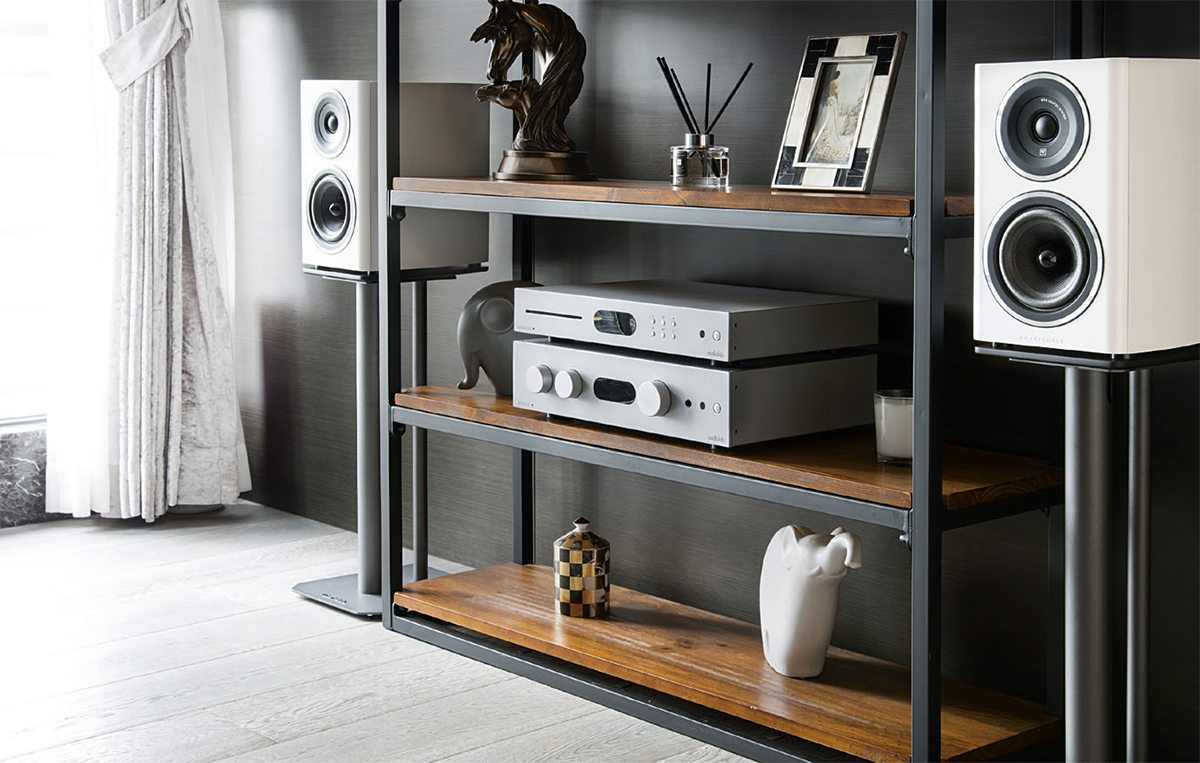 With the massive Consumer Electronics Show in Las Vegas having all but abandoned ‘high end’ audio, the hi-fi community now turns to Munich every spring for the world’s greatest showcase of new hardware. In excess of 1,000 brands exhibit there, showing everything from record cleaning machines and trick cables to £100,000+ loudspeakers – and even headphones at six figures. For those who love their music and want to hear it sounding as real as life in their homes, it’s like Christmas and all their birthdays have arrived in May. Here are just a few of the new toys for people who understand what ‘VTA’, ‘bi-wiring’ and ‘oversampling’ mean…

Dutch manufacturer Aequo Audio announced two new speaker models at either ends of their range, the smaller Stilla and the larger Diluvium. The Stilla is a small and elegant floor standing speaker, its slim form containing two 7” subwoofers, powered by Ncore amplifiers. Diluvium, the company’s new flagship speaker, is a four-way design in a gorgeous cabinet that looks like a cobra that’s about to strike.

Two new headphones were shown by Audeze, the SINE DX On-Ear and the LCDi4 Gold. The first is an open-back version of the hugely popular, sealed-back SINE – for those who prefer a more airy sound and don’t need the sealed-off privacy of the original – while the LCDi4 is a planar design for those who prefer an in-ear solution. What’s more, it also uses the same tech as the company’s massive reference-calibre over-ear models.

Portable, pint-sized digital-to-analogue converters that feed headphones are the best ‘fix’ for computer sound, TV, cable, streaming, music-via- phone or tablet and other compromises, so Audiolab’s teensy M-DAC Mini will prove a godsend to those who wonder why the sound through their earbuds sucks. It’s the smallest hi-res DAC/ headphone amp in the range, and at less than £300, it’s also the most affordable. Inside, it’s the same ES9018 Sabre32 Reference DAC as in the company’s heavy hitter DACs.

Although still best-known for its turntables, Avid has expanded into a full-line manufacturer. The Celsius Pre-Amplifier and Stereo Power Amplifier and the Sigsum Integrated Amplifier form their entry-level line-up of amplification, while the speaker catalogue has been joined by the £20,000 Reference Subwoofer that complements the Reference Four loudspeaker. Weighing a massive 140kg, it contains a floor-shaking 120 watt amp driving two 12” woofers.

Chord, on a roll thanks to the massive success of the ciggie-pack-sized Mojo DAC, has expanded that brilliant device’s capability with the clip-on Poly. This little device turns the Mojo into a fully-fledged high-resolution wireless network music player, streamer and SD card playback device, with wireless playback and control from smartphones. In the full-sized hi-fi line, Chord showed the Blu MkII upscaling digital/CD transport, for those who still get a bit of a kick out of those things they call compact discs.

dCS operates in the upper reaches of high end audio, and the Vivaldi One is the culmination of the company’s 30 years at the top of the digital audio tree. It’s a limited edition up-sampling CD/SACD/network player, delivering state-of-the-art in digital playback, including the hottest tech du jour, MQA.

Leema’s Pulse IV is an integrated amplifier for the music lover who’s fully appreciative of digital technology, but who also succumbed to the vinyl revolution: in addition to eight digital inputs, it also accepts all your legacy equipment including a turntable. With 80 watts per channel, it will drive most loudspeakers to headbanging levels and has a headphone socket, too. Offered in black or silver, Pulse IV has the ridiculously affordable price of £2,295.

Best known for eye-wateringly expensive amplifiers, Mark Levinson has responded to customer demand with the gorgeous No. 515 Turntable. It features a chassis made of a highly-damped, vinyl-wrapped MDF and aluminium ‘sandwich”’ supporting a 9kg aluminium platter. The No. 515 comes complete with a gimbal-mounted, 3D-printed tonearm, and is ideally suited to work with the company’s Pure Phono stage, as included in the recently-released No. 526 and No. 523 pre-amplifiers.

Marten’s Coltrane Tenor 2 loudspeaker uses a super-rigid cabinet made with a Kevlar honeycomb, which is then sandwiched between carbon fibre laminate as employed in the flagship Coltrane Supreme 2. An aluminium plate between the solid wood front and the Valchromat fibreboard inside also increases the rigidity, for superior stable sound. Other high tech details include that of a ceramic midrange driver – as found in the Coltrane 3 – while the diamond tweeters and ceramic bass units are from the Coltrane Supreme 2.

One of the biggest surprises at the show was PMC’s cor Integrated Amplifier, a major departure for the highly-regarded speaker manufacturer, beloved of professional users as well as audiophiles. The company’s first integrated amplifier possesses a nice whiff of retro thanks to sliding controls instead of knobs, and it accepts only line level, analogue signals, making this a delicious throwback to the 1970s. Keeping it current, the cor has a high-quality headphone output and looks to die for, if you worship at the feet of Dieter Rams or Raymond Loewy. It delivers 95 watts per channel and will sell for £4,995.

Primare showed a completely new range of models targeted with connectivity at its core. Each model features Prisma, the company’s proprietary whole-home, high fidelity control and connectivity solution. The Prisma system offers network playback from stored and streamed media, Wi-Fi and Bluetooth connection, as well as multi-room/multi-zone connectivity and control, all managed through the Prisma application, allowing Prisma system management from any mobile device. The line-up includes the I15 and I35 Prisma integrated amplifiers and CD35 Prisma CD player. The I35 and CD35 will be available with or without Prisma technology, while all models include a C25 Primare system remote control and will be available in black and titanium finishes.

One of the most successful small loudspeakers of all-time, Wharfedale’s Diamond, is now the Diamond 11, which indicates how many generations it’s gone through since 1981. Marking the brand’s 85th birthday, the Diamond 11 comprises a range of eight models, all offered in a choice of black, white, walnut and rosewood, up to tall floorstanding models and centre channel and surround speakers for home cinema. The smallest, the 11.0 at £159 per pair, will represent – as ever – the best way to build a basic, entry-level system, because it delivers more sound-per-pound than one can imagine. And all for the price of a pair of trainers… The dCS Bartók: Streaming Like You’ve Never Heard it Before