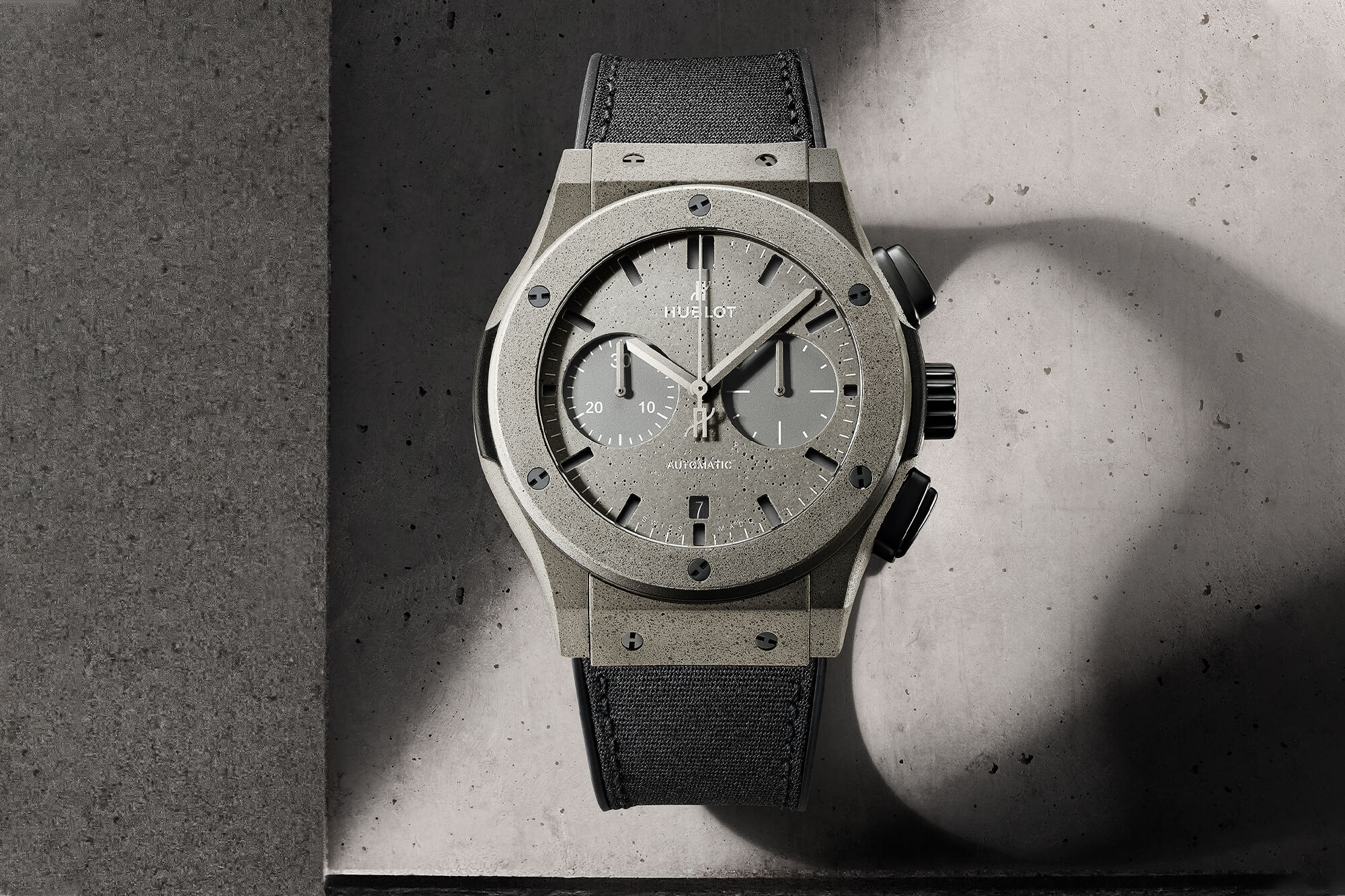 Hublot opened its largest boutique on New York’s Fifth Avenue in 2016 and released the Classic Fusion Aerofusion Concrete Jungle, a chronograph with a concrete bezel, to celebrate.

While concrete might seem a terrible choice as a watchmaking material (although Girard-Perregaux’s 2012 tribute to architect Le Corbusier used a concrete bas relief dial to great effect) few would argue against its role in New York’s development as one of the highest profile cities in the world and its truly astonishing skyline simply wouldn’t exist without it, which makes it a pretty fitting tribute. 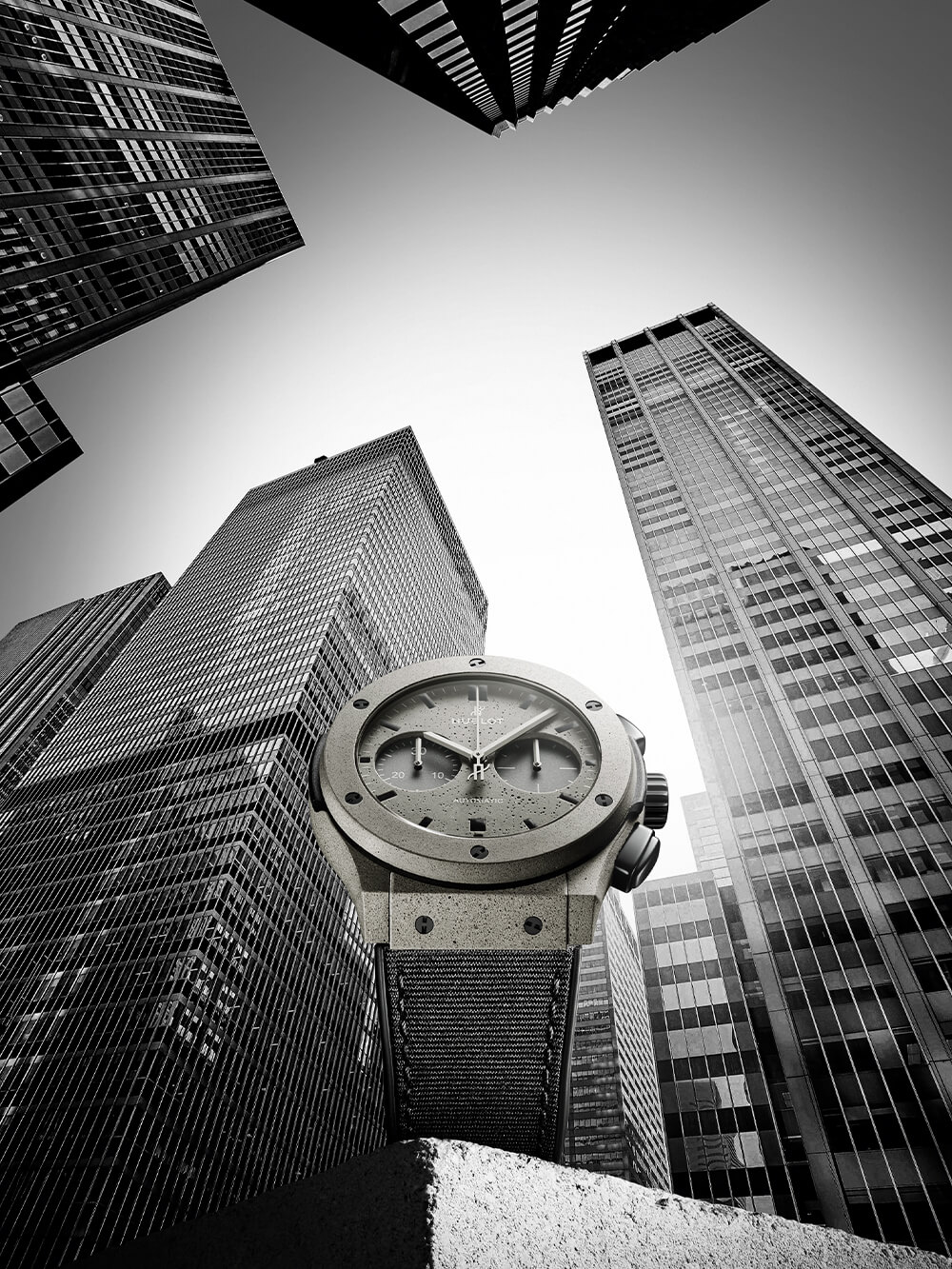 New York might not have been the location of the first skyscraper (that honour went to Chicago in 1885 with a building that, at just 10-storeys, didn’t so much scrape the sky as nod in its general direction) but the prevalence of high-rise buildings would go on to define the city over the years, earning it the Concrete Jungle nickname.

Now for the follow-up, the second watch to bear the Concrete Jungle name, Hublot has upped its game significantly, producing not just bezel but case and dial using concrete, offering the material far more in the way of context. 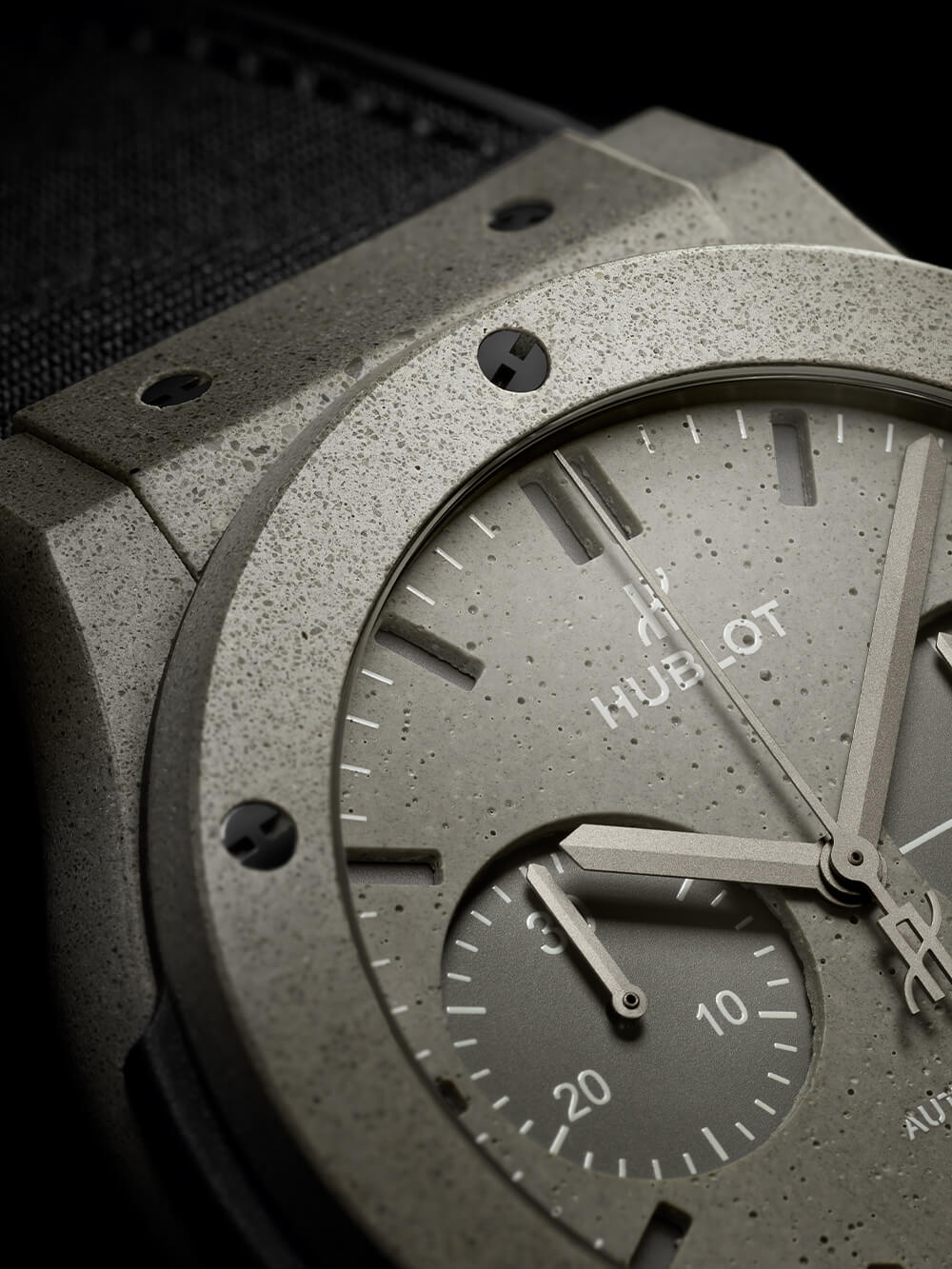 Concrete places somewhere at the opposite end of the spectrum to precious metals in pretty much every sense; it is dull, matt and, given its composite nature, presents a variable complexion. While this makes for a poor choice to use as a design highlight but used as base concrete becomes altogether more aesthetically interesting in the same manner as industrial interiors and polished concrete floors. 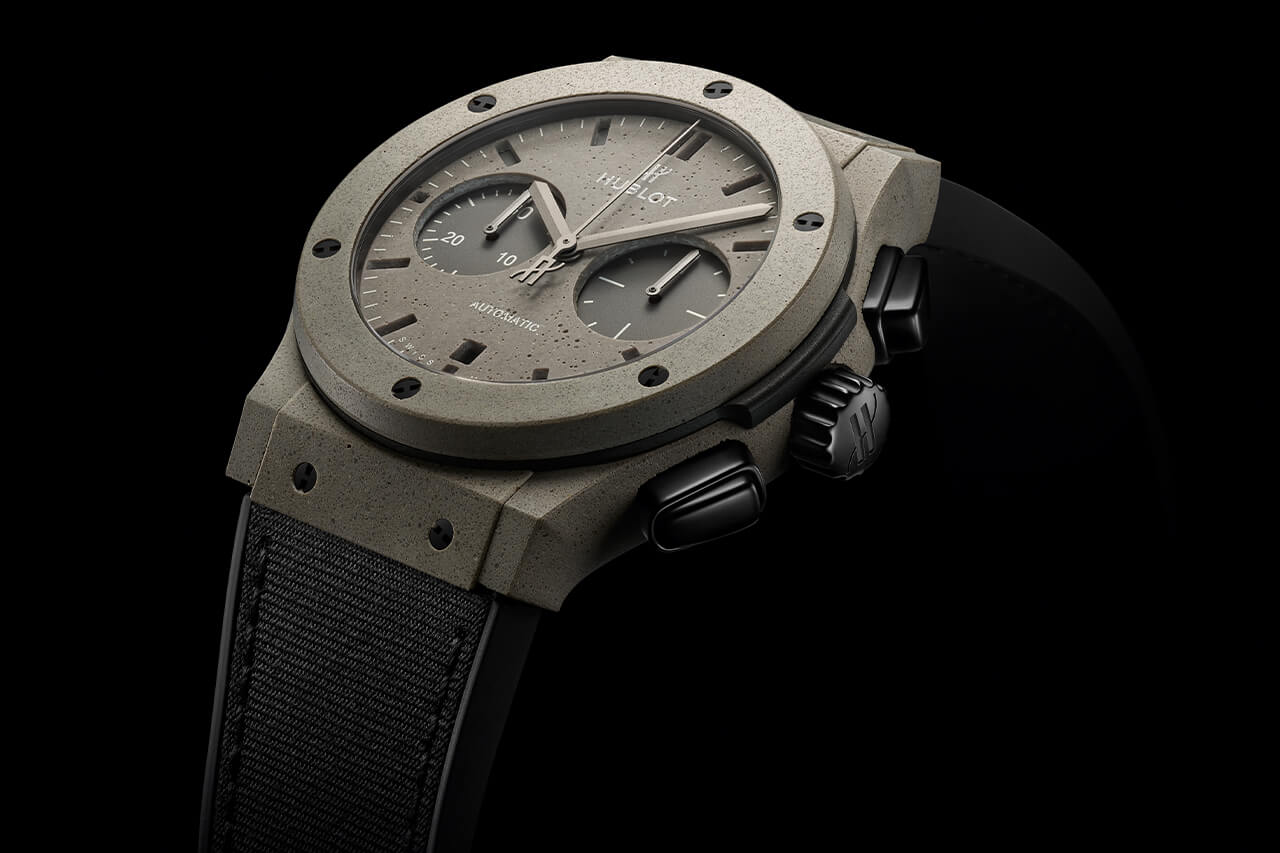 While both watches have used a mix of concrete and epoxy resin to form a material that not only has the appearance of the building material but also withstands the rigors of daily wear, the mixture has been reformulated for the new piece using 65-75% fine cement, 25-30% epoxy resin and 5-10-% fibreglass, which replaces steel as the reinforcing material this time around. Hublot also makes a point of mentioning that the epoxy used includes a UV-fixing additive which makes me wonder what colour the bezels of the 50 watches created in 2016 are now.

Somewhat perversely, Hublot has also applied an ‘anti-graffiti’ treatment to the concrete to prevent contaminants impregnating it over time, now while I understand the practicalities to call out graffiti by name in a New York tribute piece just feels wrong.

The Concrete Jungle New York certainly builds on the shortcomings of its predecessor, which was an illegible mix of skeletonised dial and monochrome colour scheme, but it is not without faults of its own. 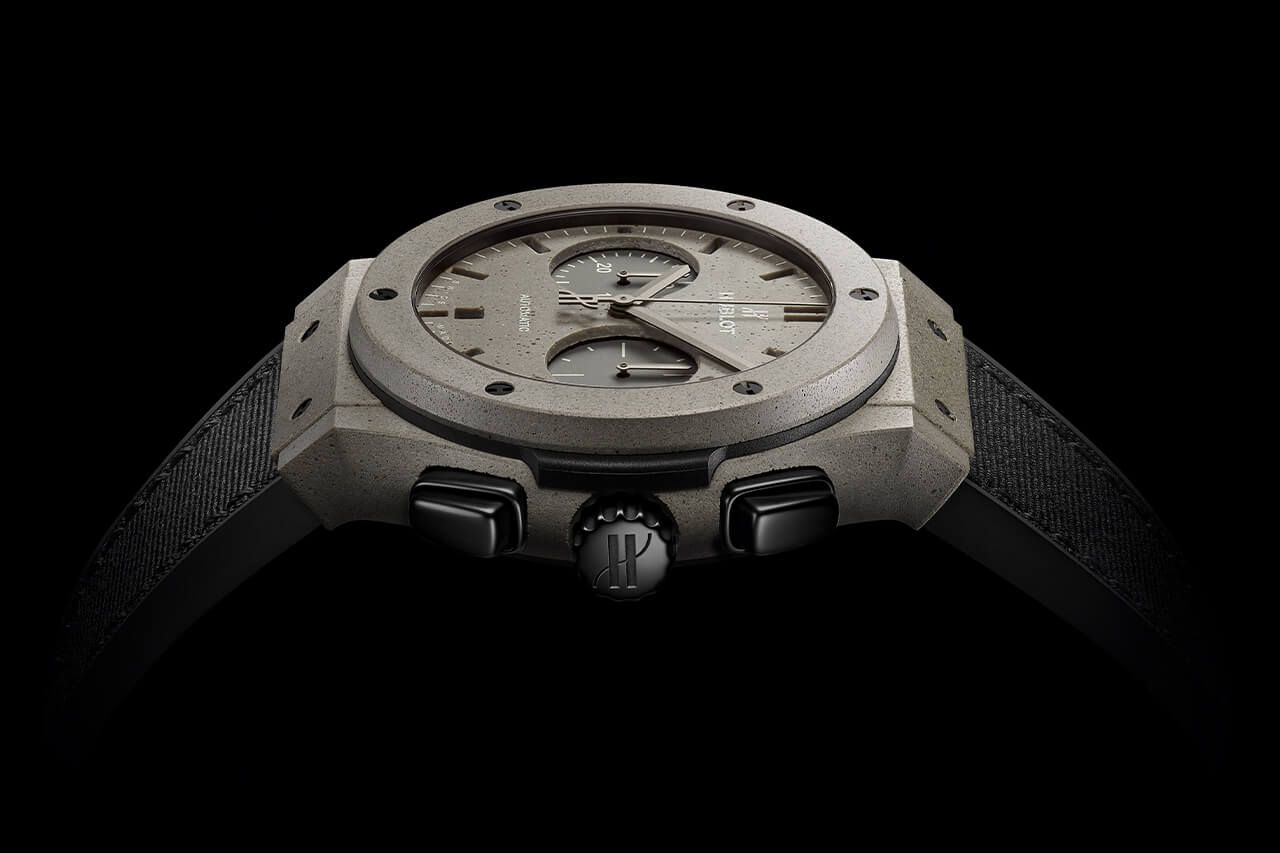 While the exterior concrete components have been polished and sealed to present a smooth, flat surface that, while not luxury in its traditional sense, could at least be considered professional from a manufacturing standpoint, the dial is pockmarked by air bubble voids in the material so pronounced that the pad-printed branding and text hasn’t even taken in places. It’s no doubt a conscious design decision but I loathe printing on dial surfaces that are not completely flat and the distortion it causes. Why not print on the underside of the sapphire crystal instead? 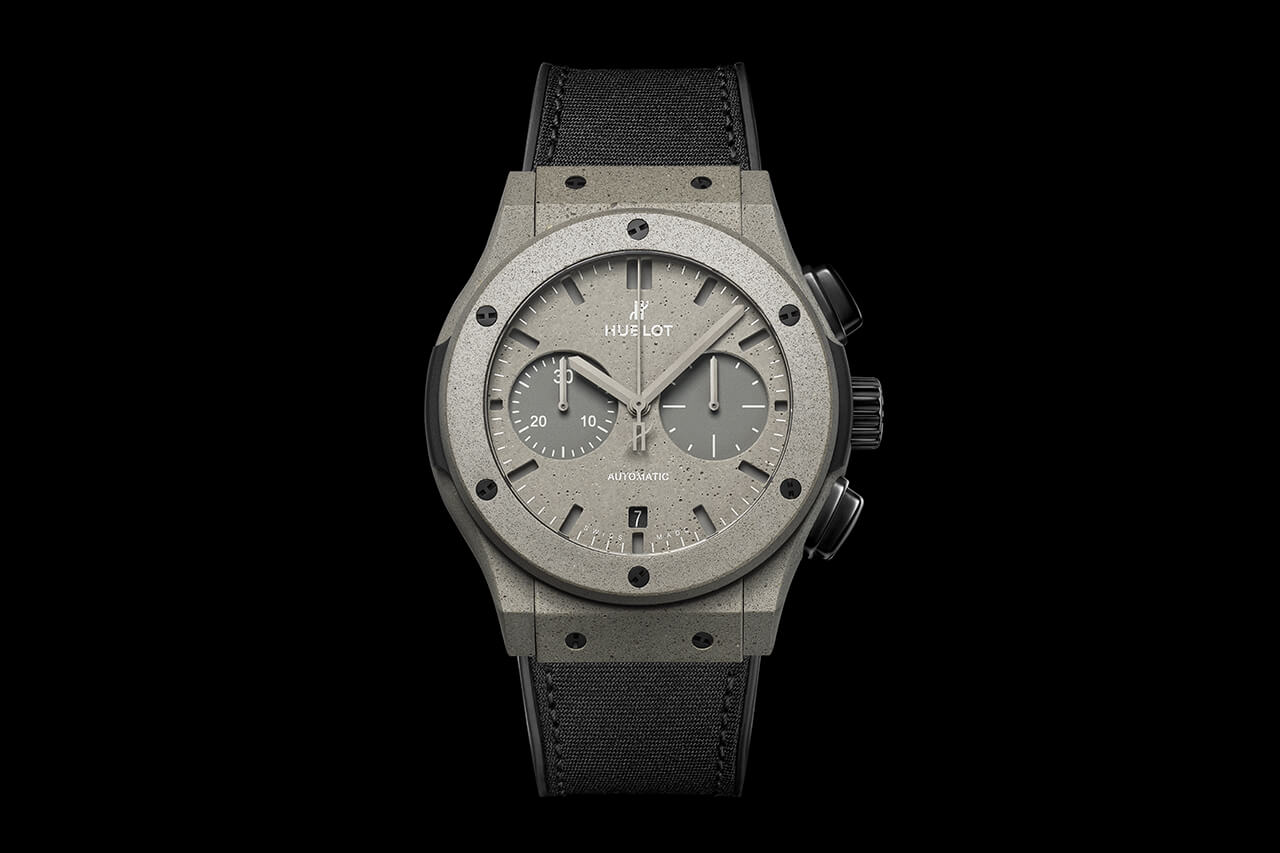 Inside its 45mm concrete case (which manages to remain water resistant to 50m) lies a Hublot HUB1143 28,800vph automatic manufacture chronograph movement with a power reserve of 42 hours while caseback and pushers are microbead-blasted black ceramic.