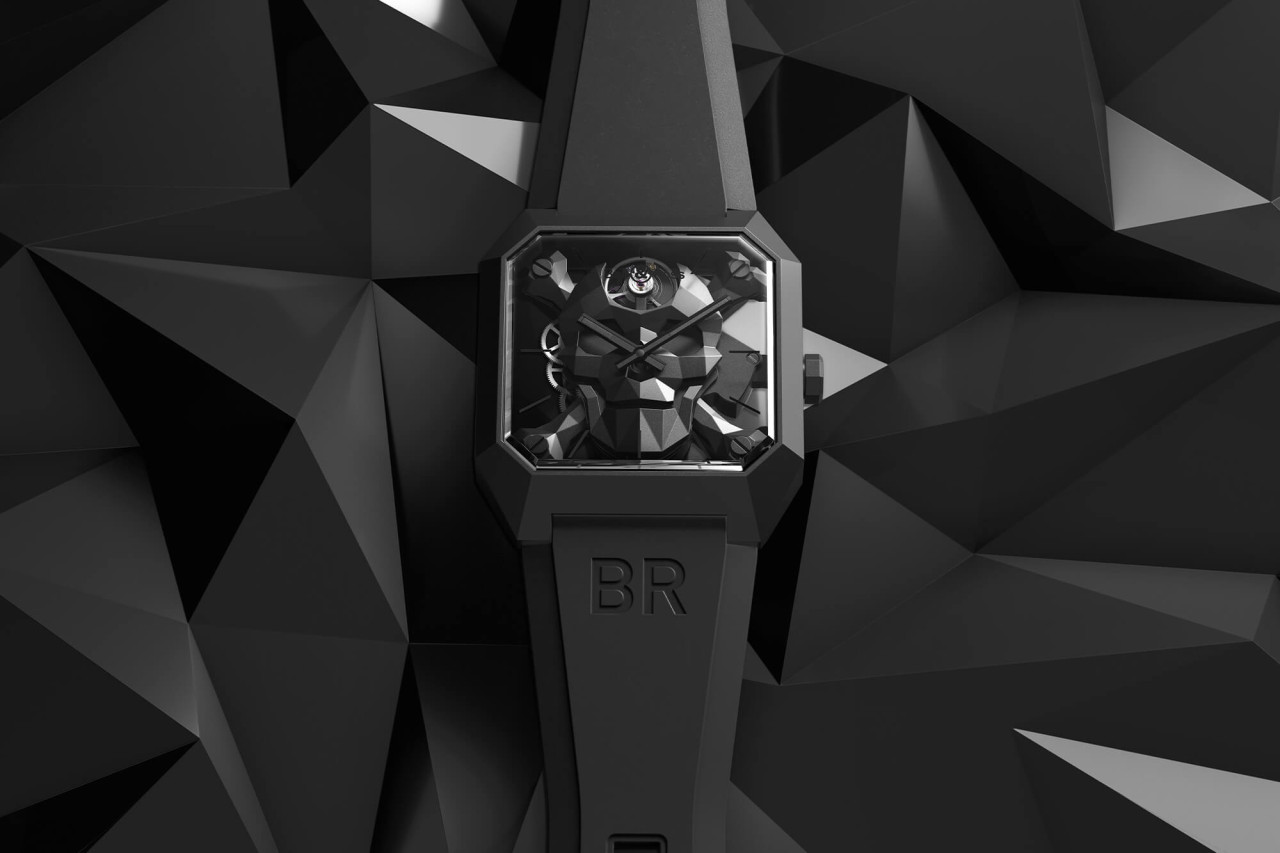 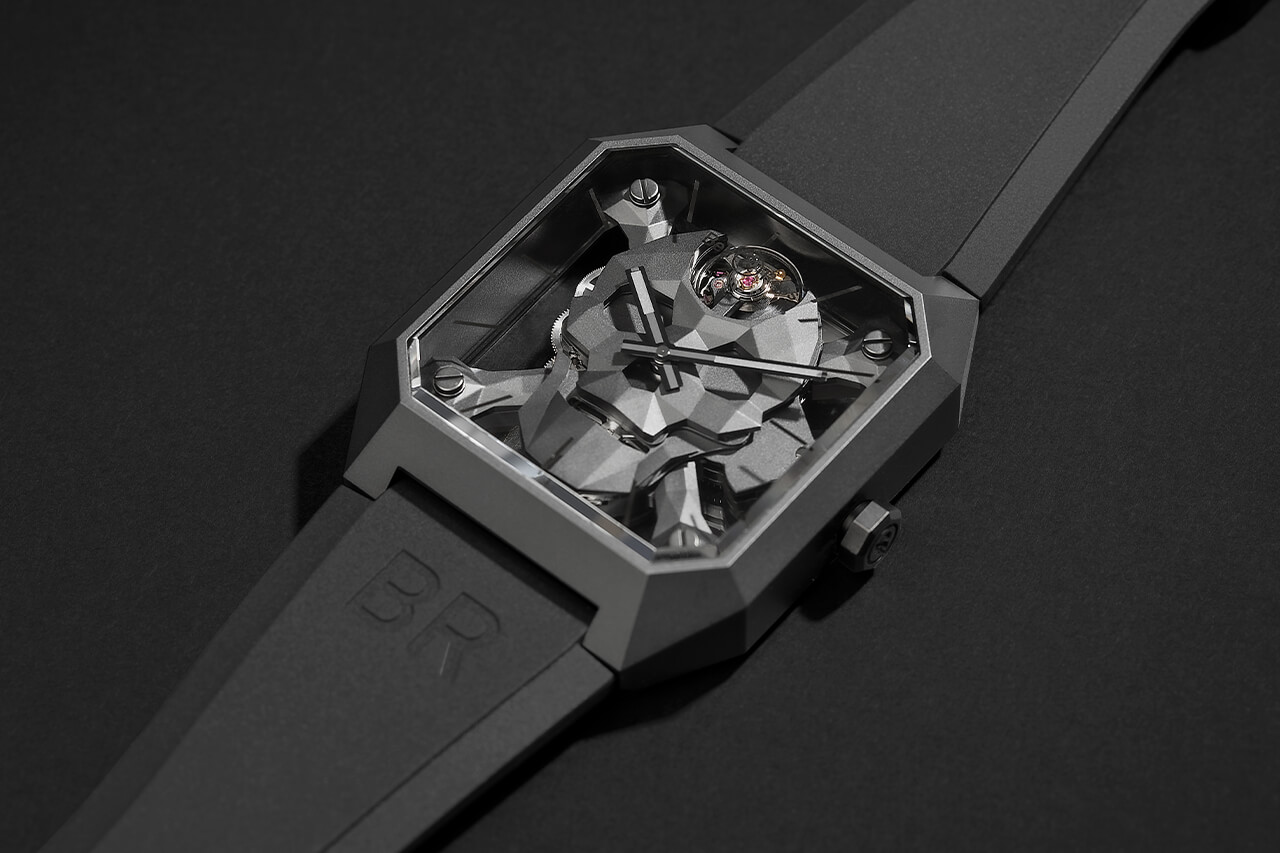 Memento Mori, or ‘remember death’; it’s hardly a cheerful maxim but one emotive enough to stick in the fertile consciousness of introspective types since the days of ancient Rome. Honestly, given how easy it was to die doing virtually anything at any point before the mid 20th Century the sentiment would have been pretty hard to forget even without a pithy catchphrase.

It’s also a startling efficient use of language, with just two words conveying a number of complex philosophies; not only thought to have originated to remind Roman generals that even the most powerful die but also a pretty powerful argument to live life to the fullest. 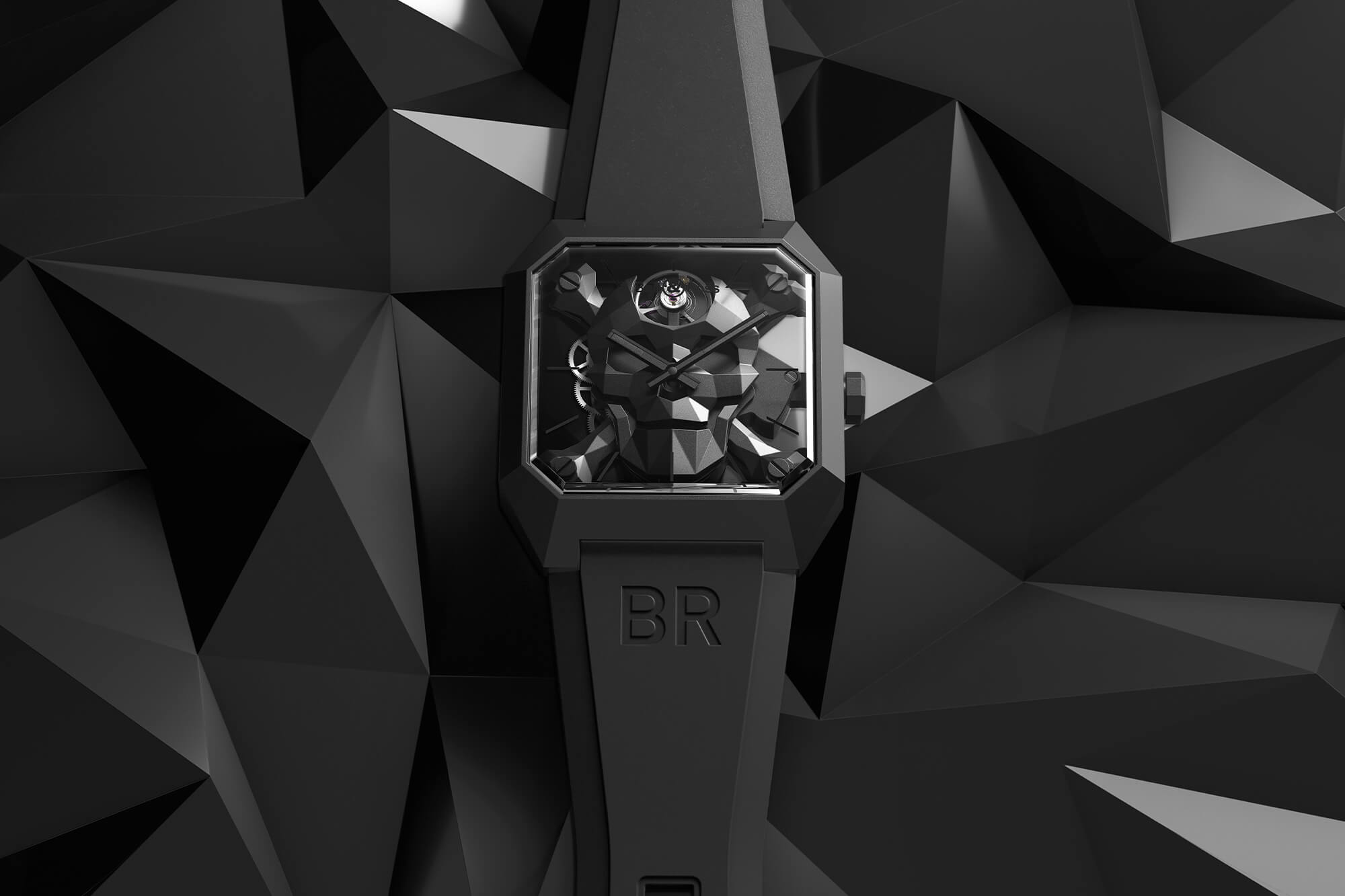 Unsurprisingly Memento Mori, along with its skull motif, has also been associated with timekeeping for as long as horology has been portable, with rudimentary 17th Century verge escapement pocket watches sometimes encased in silver skull-shaped cases.

Sometime later, 2009 to be exact, Bell & Ross got in on the act with the BR 01 Skull, leaning more on the aggressive symbolism of the skull and crossbones, often employed by marauders, pirates and specialised troops in combat to instil fear in enemies, in line with the French brand’s military aesthetic.

In the decade since, the skull has featured, often in relief, at the centre of its dials but now comes the turn of a very different take on the skull. 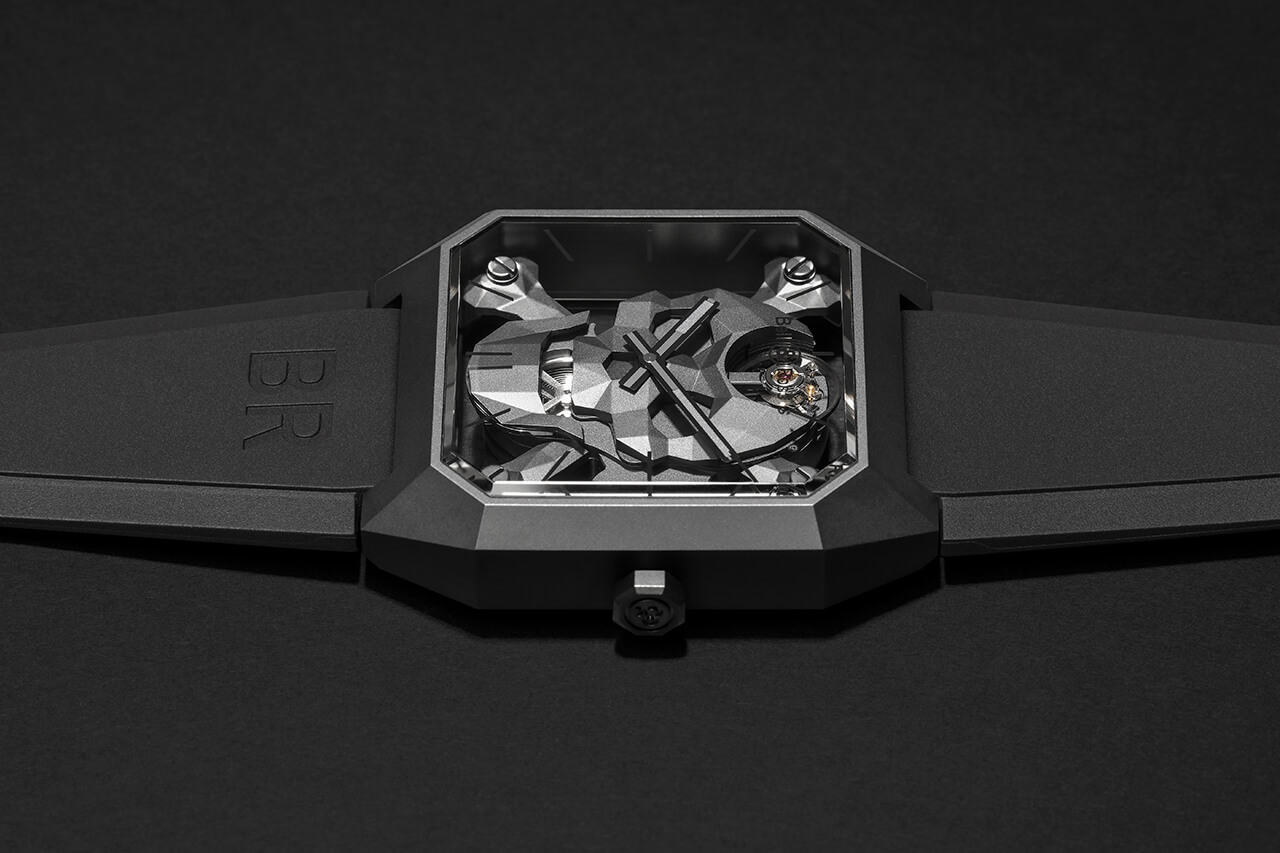 The BR 01 Cyber Skull reduces the skull down to its base elements using bold matt black facets, much like the geometry of stealth aircraft and similar in style, if not colour palette, to the work of artist Richard Orlinski.

Rather fittingly the skull is floated in the centre of the case, using the crossbones as mounting points to each of its corners which leaves transparent voids on each side of it to create a contemporary, modern art take on the skeleton watch. 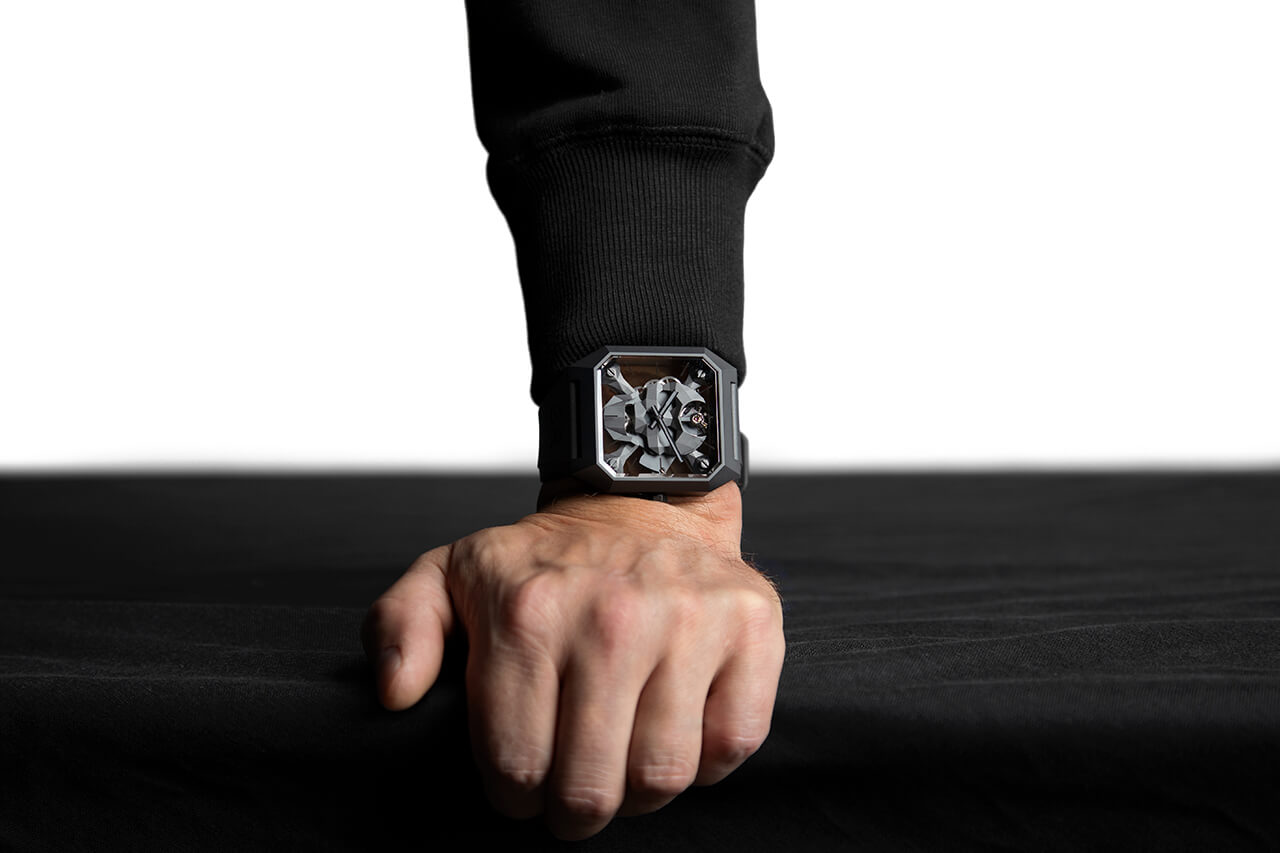 Virtually all of the mechanics of the 4hz manually wound movement are either shielded from view behind the skull (or visible on the reverse) with just the balance visible in in centre of the skull’s forehead. But Bell & Ross’ ‘laughing skull’ mechanism turns the whole thing into an automaton, which sees the jaw mandible move as the watch is wound, revealing the mainspring barrel below. It’s a neat trick for a watch at this price point and one that is sure to keep owners of the watch entertained. 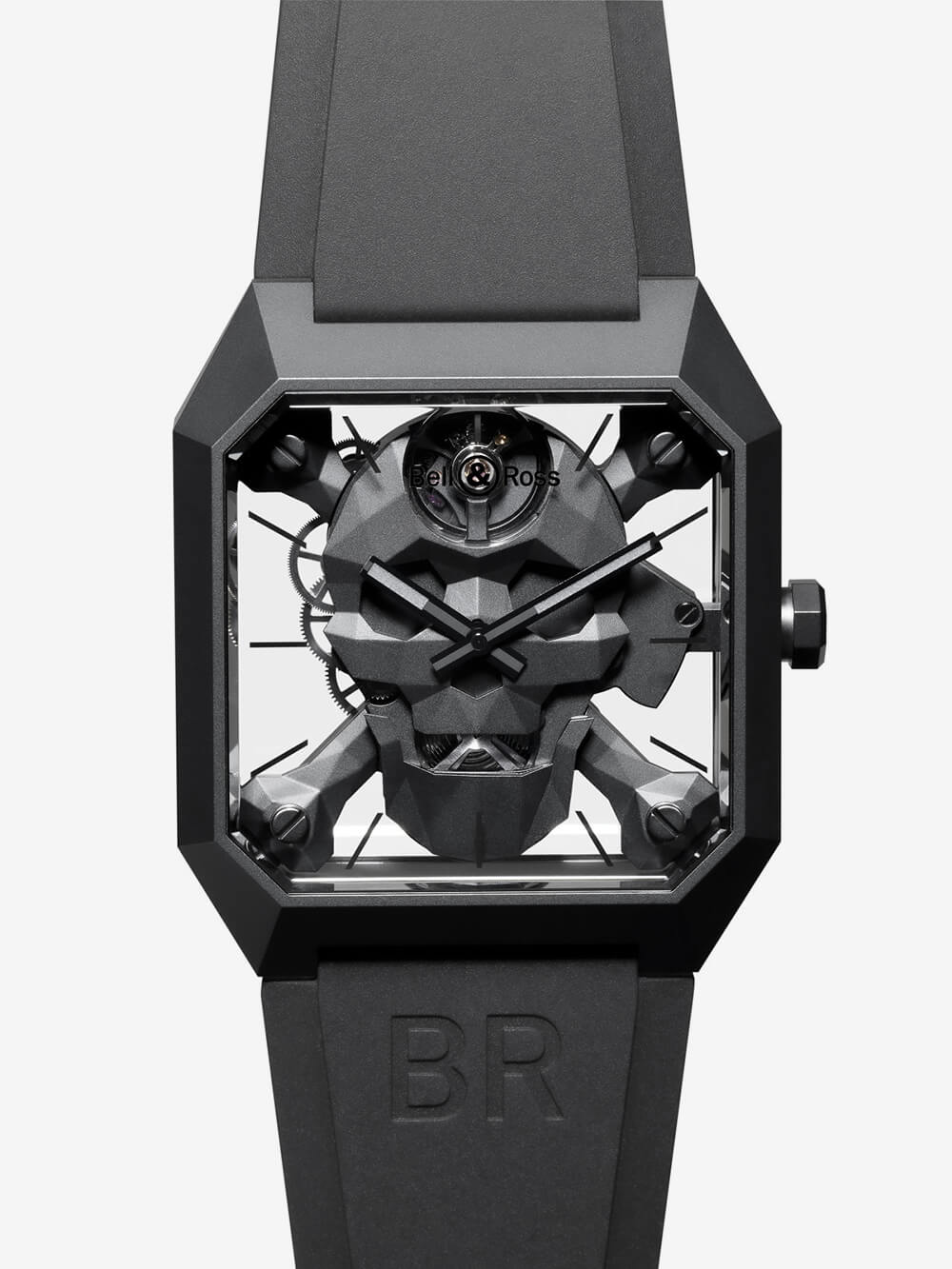 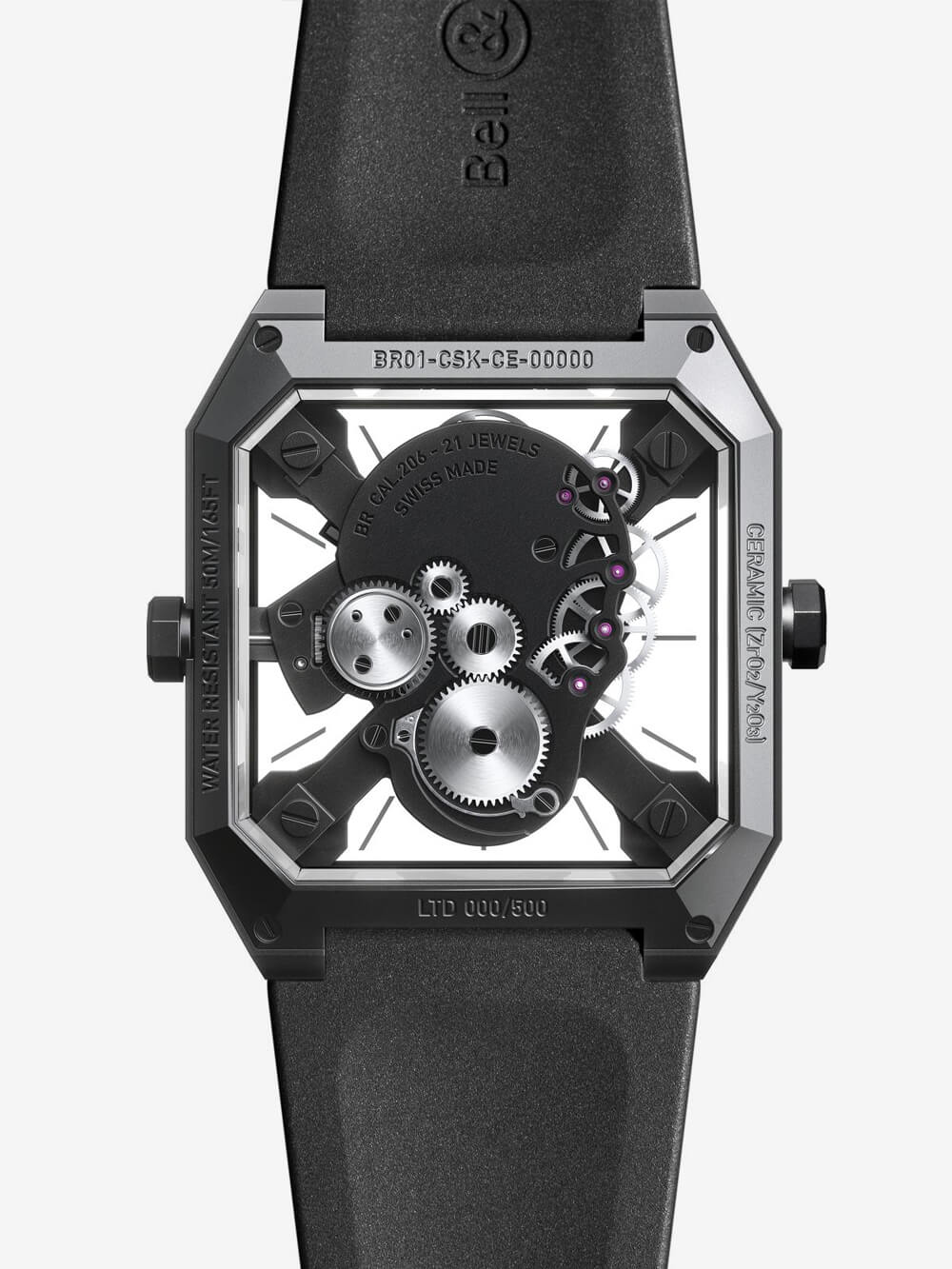 Just as striking is the case, a complete departure from Bell & Ross’ usual ‘circle in a square’ case concept. Curves have been completely banished and we get a rectangular case (again matt black) with corners squared off at 45 degrees which creates an almost jewel-like footprint. The bezel-less design sees the sides of the case sweep up equally faceted sapphire crystal.

It should all be too much but I can’t help admiring the BR 01 Cyber Skull with its complete lack of subtlety, restraint or kowtowing to market trends.