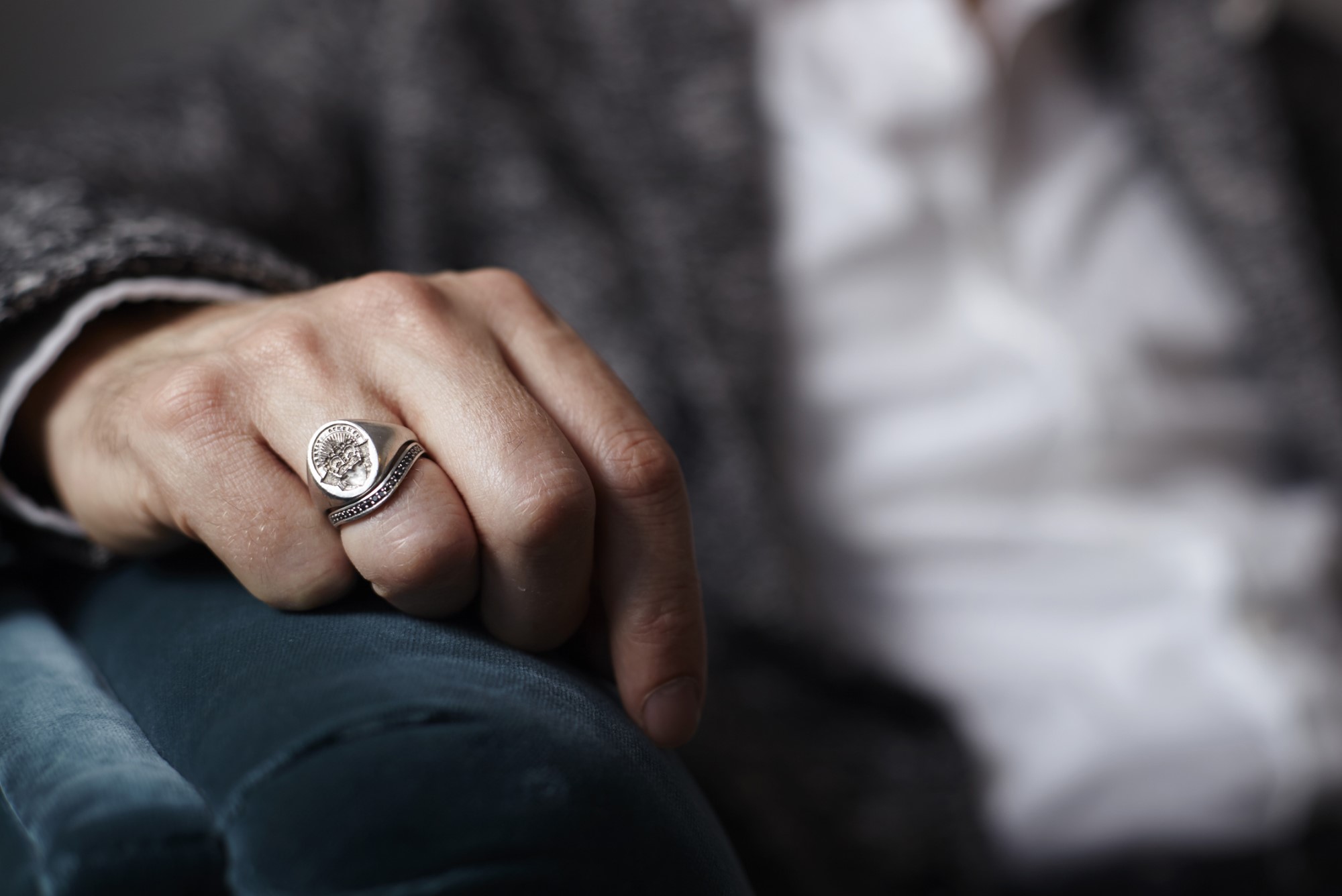 Other than a watch and a wedding band, a signet ring is the only piece of jewellery every man can wear. And we mean every man. You’ll see them on the fingers of everyone from lords of the manor representing their family crest to East End gangsters straight out of Lock Stock and Two Smoking Barrels.

Frank Sinatra wore one, as did Elvis Presley; the Godfather wore one, as did half the crime family bosses in America. Plenty of university graduates have their own halls of learning immortalised on signet rings and there’s not a secret society worth the name that doesn’t come with their own, much less secret, identified.

They may have originally been used to impress a wax seal on letters, but honestly, who uses wax seals anymore? Hell, who writes letters anymore? Today they’re an accessory like any other, except for the fact that they are, by their nature, personal.

Sure, you might not actually use that family crest of yours any more, but a signet just wouldn’t be the same without one. If you don’t have study walls laden with heraldry, it’s a good excuse to show off what matters to you. Most signet ring specialists can even mock you up your own crest; not a bad thing to pass down.

No matter how you want to use your signet ring – style statement, symbol of a secret society or just something for your mafioso underlings to kiss when they ask a favour – there are plenty out there to choose from. Here are five of our favourites. 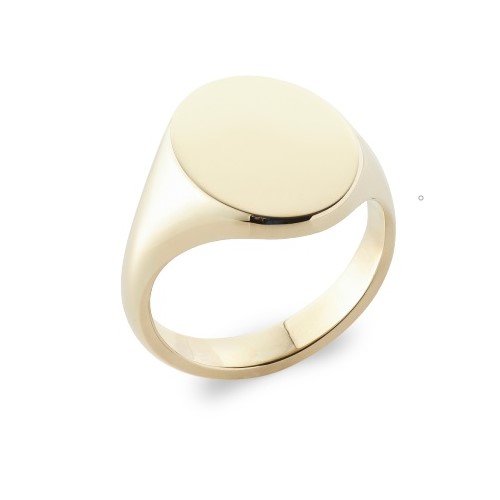 Let’s start with the archetypal rounded signet ring, heavy and gold. This version from Hatton Garden’s signet specialists is a solid weight of yellow gold, complete with a huge area for engraving. It’s thick enough for their signature deep seal carving and, if you’re not sure what you want that carving to be, the designers at Rebus are more than happy to mock a few options up for you – everything from a faux family crest to a hunting scene to a fingerprint. They have more than enough canvas to work with; you may as well use it. 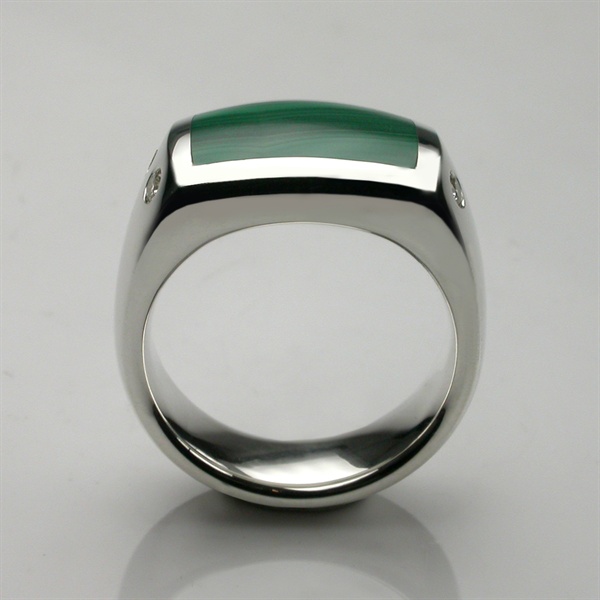 Next up, the classic stoned signet ring. Stephen Einhorn is best known for their use of 2,000-year-old wood dredged from the Thames, which is certainly a talking point, but we prefer the natural strata of beautiful green malachite. It adds a dash of colour to the usual plain precious metal of a signet ring and the stone itself can be engraved just as easily. Well, just as easily for Stephen Einhorn; don’t expect the same at your local Beaverbrooks. This is a serious heirloom piece. 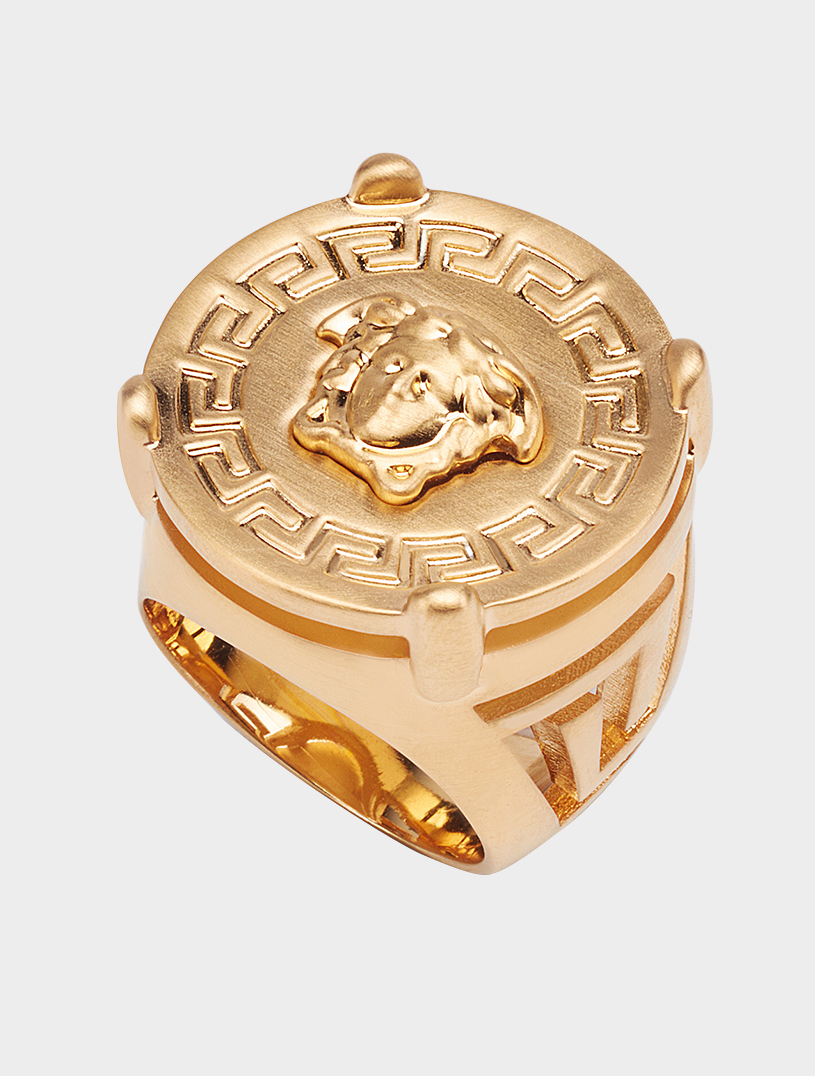 Now let’s ramp things up with a statement ring. This is less of a personal embellishment than it is some serious swagger fit for Italian billionaires and LA rappers alike. Flamboyant doesn’t even come into it. The ring is pure Versace, with the iconic Medusa head front and centre surrounded by a Greek maze. The band too has been cut into the same maze pattern, meaning that no matter what angle you look at this thing from, you’ll know what it represents: that you likely have a 50m yacht moored nearby. 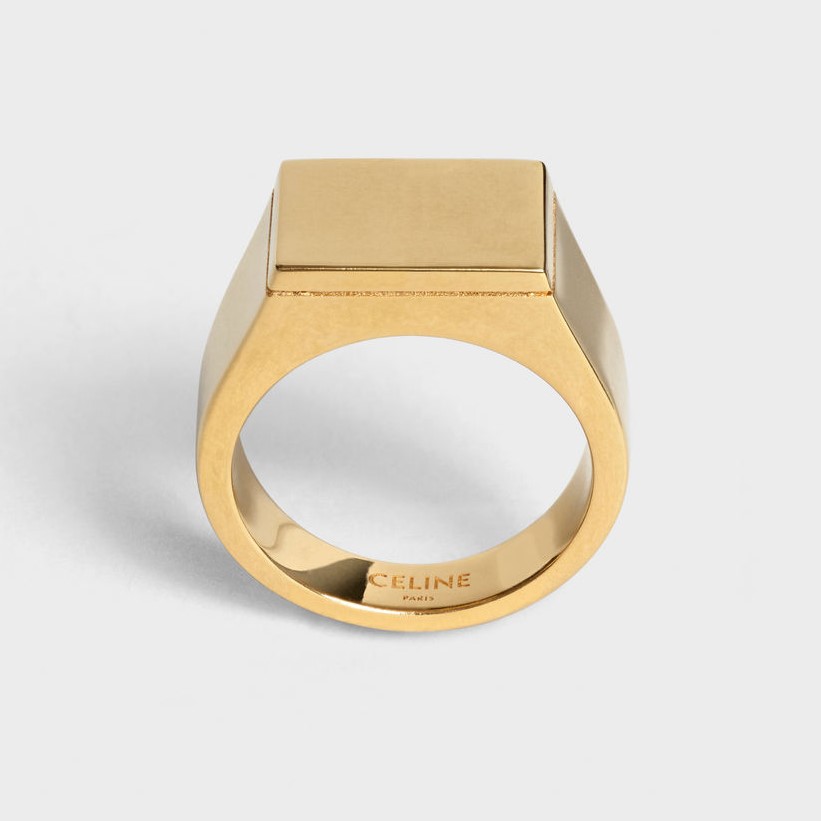 Squaring a signet ring adds a little more masculine structure to it without changing it too dramatically. This simple, rigid rectangular version from Celine and, as it’s actually brass rather than straight-up gold (if it works in watchmaking, it can work here) it’s more hardwearing than the usual emblems. The front leaves plenty of room for some dramatic engraving too. It’s simple and striking in equal measure. 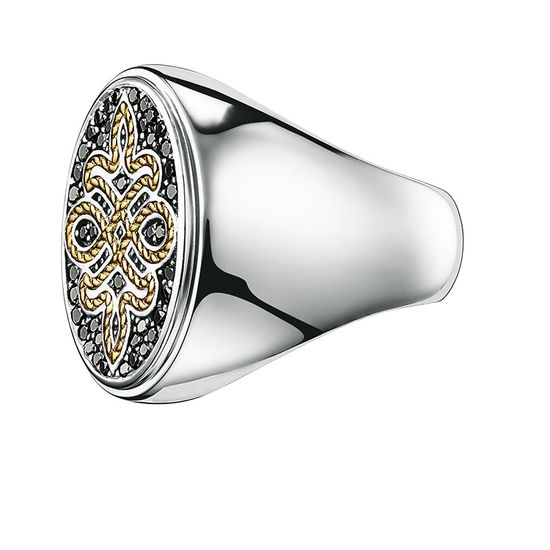 On the other hand, you could cast simplicity aside in favour of some serious glam rock credentials. This blackened Sterling silver piece from Thomas Sabo conjures plenty of eye-liner and TV-out-the-window levels of debauchery. The yellow love knot motif is surrounded by black pavé diamonds for bright, shining contrast. Pair with one of Sabo’s matching pendants to channel your inner rock god. Just go easy on the studded leather.