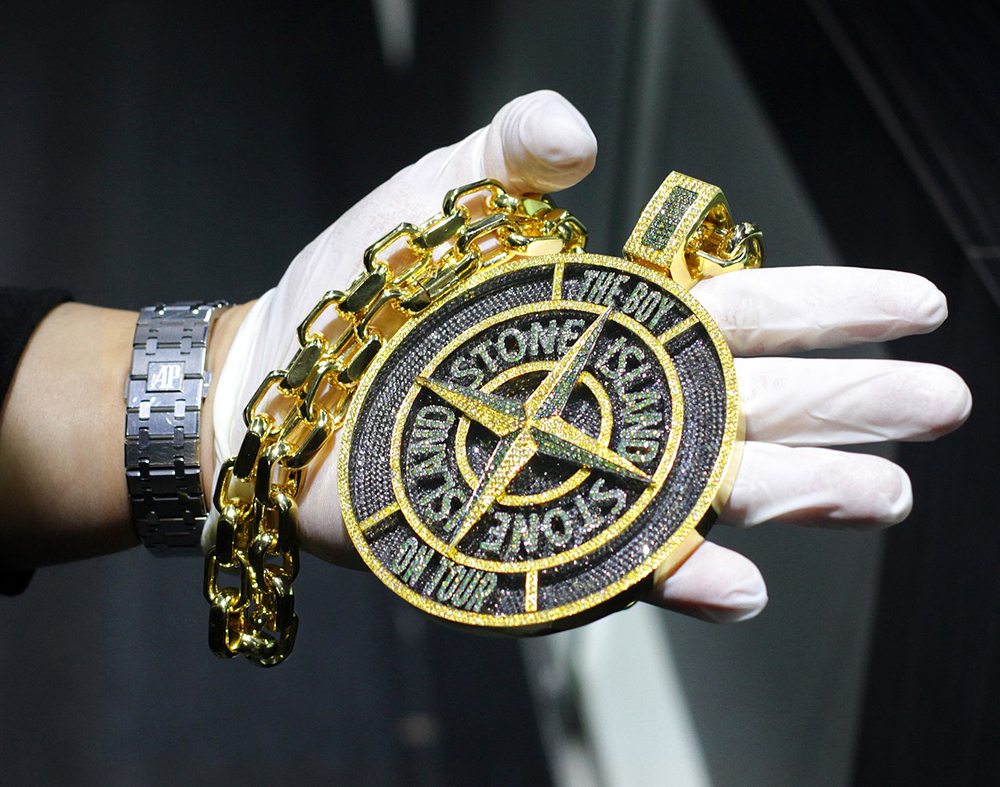 Rappers and bling go together like Russian oligarchs and dealings with the US government and neither one show any signs of bucking the trend. That said, rather than the usual diamond-encrusted crosses or gold chains worthy of the Titanic’s anchor, at least Drake went for something a little closer to his heart: Stone Island.

Drake’s been a fan of the sports and casualwear brand for years to the point where their sponsorship of his latest Boy Meets World tour was inevitable. It’s a fair trade; he’s barely ever seen out of their jumpers and jackets. However, it’s unlikely that either expected what jeweller to the stars Ben Baller – who has worked with The Weeknd, Snoop Dogg and Kanye West among many, many others – created for the occasion.

If you didn’t even know the brand existed, Baller’s Stone Island pendant would live up to its name. Set into 888 grams of gold, the pendant consists of black, green and canary yellow diamonds set into an oversized replica of the Stone Island logo. The stones reached a grand total of 79 carats which isn’t too much of a surprise given the size of the thing.

I made this #StoneIsland piece for The Boy during his #BoyMeetsWorldTour (@stoneisland_official was the main sponsor for Drake’s tour) 888 grams of gold total (custom hermes link) 79 carats in 💎s (Triple A black diamonds, green diamonds and natural canary diamonds). It is EXTREMELY difficult to mix green diamonds with a black diamond background. But WE DID THAT @ifandco We could have easily went white on white, but it wouldn’t have been as legendary. #OVO #MoreLife #IFANDCO #LightWork #Drake

Apparently Baller was considering going white on white rather than the shaded design he finally came up with, but it wouldn’t have had near the impact of the end result which has an estimated value of $100,000. Sure that’s a drop in the ocean for the artist, but we can’t help wondering how long he can wear his new treasure before his neck starts hurting. The 5 Most Expensive Celebrity Watches Interview: The Brothers Behind Shamballa Jewels