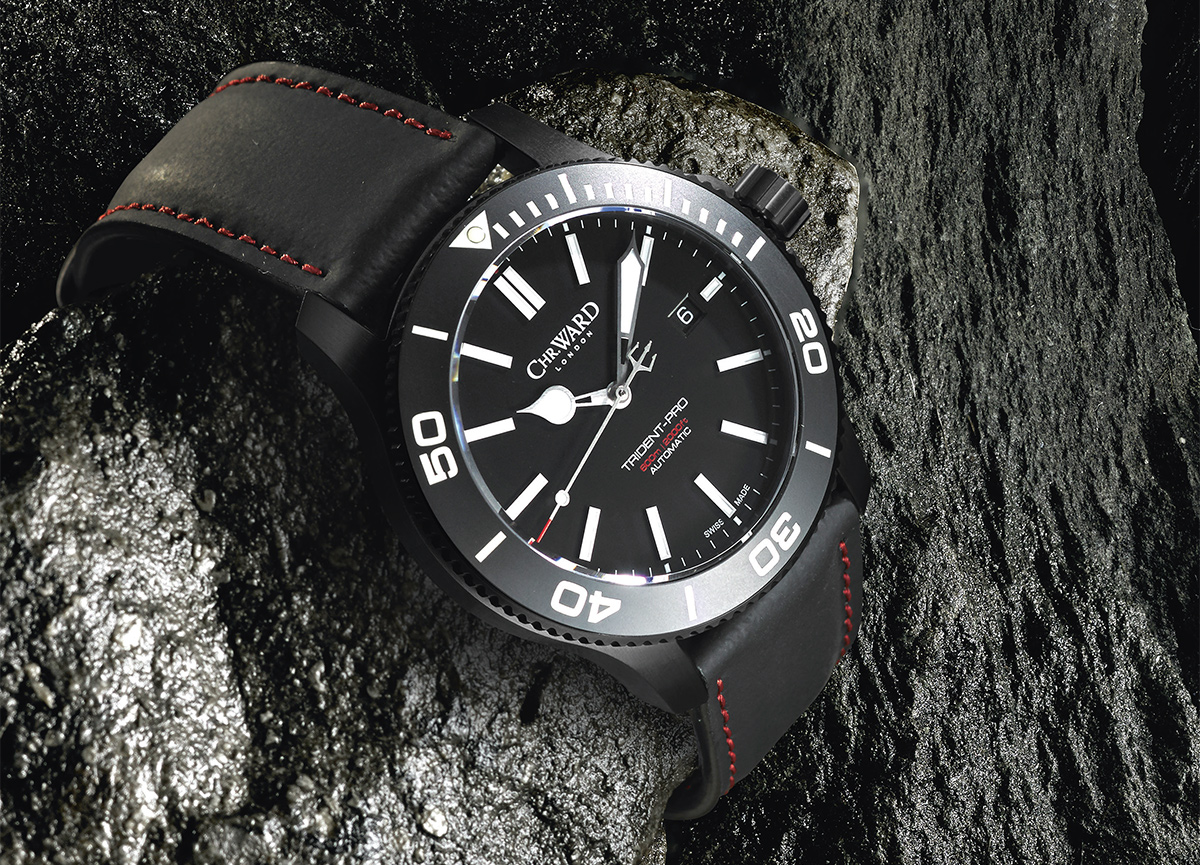 What makes a watch British? Its UK origins or an English founder? Or should it be made in Great Britain to qualify? How about simply having a British name? This vexing question of Britishness has challenged the patriotism and purism of watch enthusiasts who desperately want watchmaking in the United Kingdom – especially English watchmaking – to return to its former glory.

English watchmakers once ruled the industry, which they simply gave away to the Swiss in the late 19th century due to the classic mix of inertia, stasis, arrogance and other acts of commercial naiveté and/or suicide. Genius, however, was never in short supply. The lever escapement, advances in chronometry – Abraham-Louis Breguet may be the Da Vinci of horology, but the English got there first.

If it were only about origins, then no less a house than Rolex would be British, because Hans Wilsdorf co-founded the company in London in 1905, before moving it to Geneva, Switzerland, in 1919. The current Arnold, Tompion and Graham brands have their nominal roots in Great Britain, but are now foreign in all but name. As for the nationality of the principal personnel being the qualifier, both Speake Marin and Greubel Forsey have British founders, but the two companies are based entirely in Switzerland.

To drive the hardcore Anglophile nuts, there’s the obverse situation: companies founded and based entirely in the UK, but using movements from Switzerland, Japan or China. This is a situation that drives the purists mad, for purism would deem that only Roger W. Smith, Loomes and the Struthers are truly all-British.

Perhaps we need to be more sanguine about the whole affair, and be grateful that any watchmaking has returned to these shores. It’s arguable that nothing is made today that’s entirely of one nation, for surely the rubies and gold used in all of the fine watches made in Switzerland aren’t mined in that country, any more than the computer chips used in most of the world’s cars are made in-house. Trust me: the likes of Rolls-Royce and Ferrari do not make integrated circuits.

But you get the drift. There must be a key element, some presence of pure Anglocentric style, nature, bloodline or attitude that makes a watch British. None would argue that Bentleys aren’t British, despite German ownership and factories in Dresden, Zwickau and Bratislava. 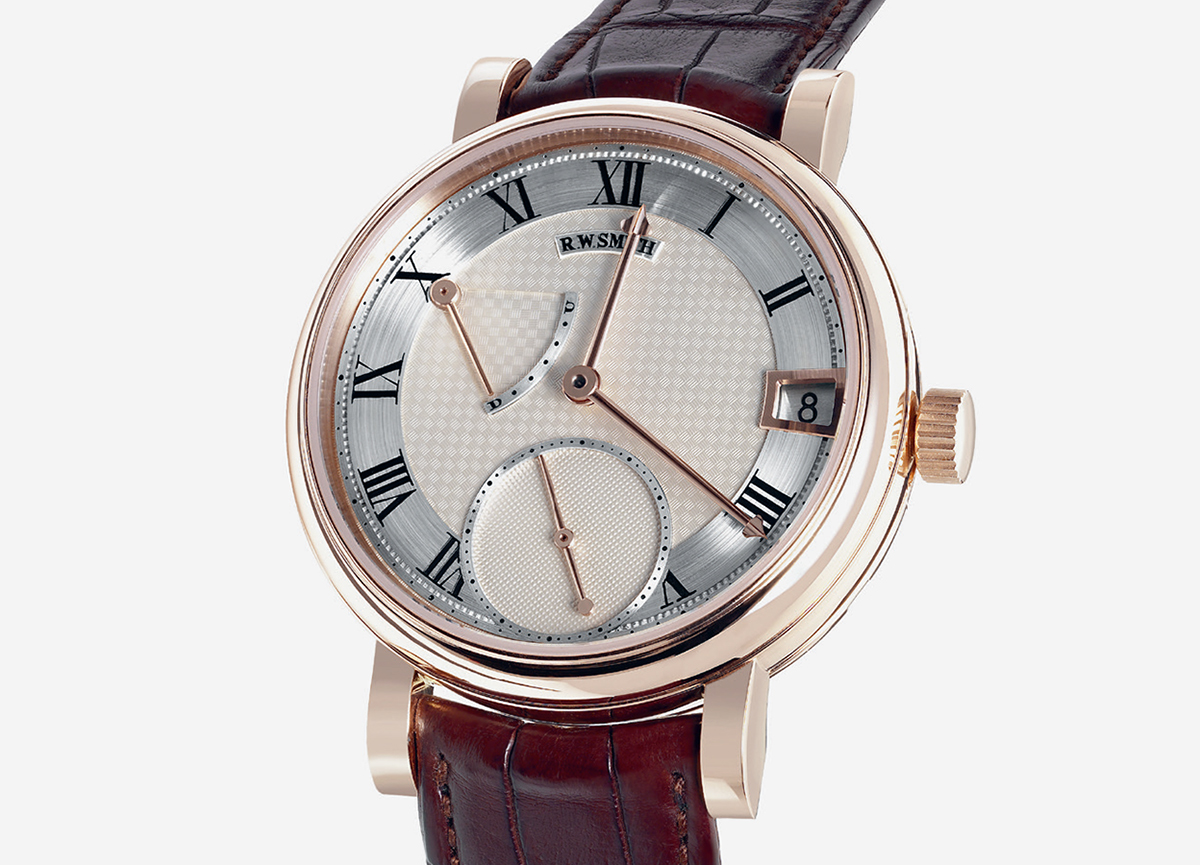 If the aforementioned Roger W. Smith and the Struthers represent true British watchmaking, their exclusivity precludes them from leading a revolution. Smith’s timepieces are believed by some to be the finest money can buy, the young Roger learning at the bench of George Daniels, probably the greatest watchmaker of the 20th century. He can only produce them however, in low double-digits per annum. The Struthers – husband and wife – are reviving 19th century techniques, but, like Smith, are at present able to satisfy only an exclusive coterie of watch connoisseurs.

At the other extreme are the British brands able to sell watches in the thousands. Christopher Ward has used online sales to create a company offering high-value watches with British provenance and Swiss movements, with prices so attractive that they inspire in multiple purchases. Bremont – easily the most visible of the new wave of English watch brands – specialises in chronometers, primarily aviation chronographs but with a fine line in sophisticated diving models. Its marketing, too, is second-to-none, and so British that you wish Terry-Thomas was still alive to be its ambassador. 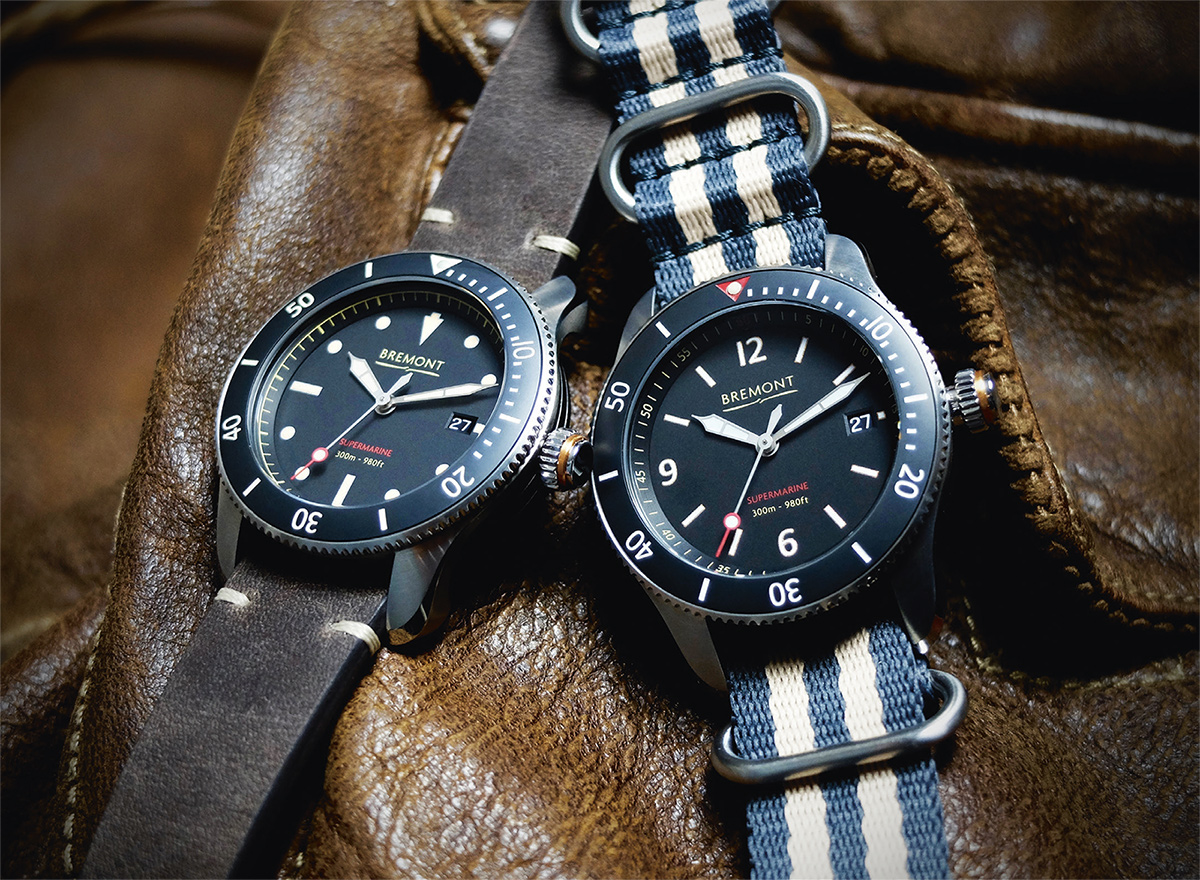 To celebrate their Britishness, Bremont showcased their new collection in London; www.bremont.com

Among the brands working toward delivering watches with their own UK-made movements are Garrick, Pinion and Loomes. All boast styling that oozes Britishness, and their initiative is noteworthy. Schofield has a different approach to all the rest. This brand has created a unique market profile by producing watches targeted at those who favour things like “real” coffee, Havana cigars and straps made from Harris tweed. As much as one likes to avoid the “h” word, the company is so “hipster” that it should relocate to Shoreditch. 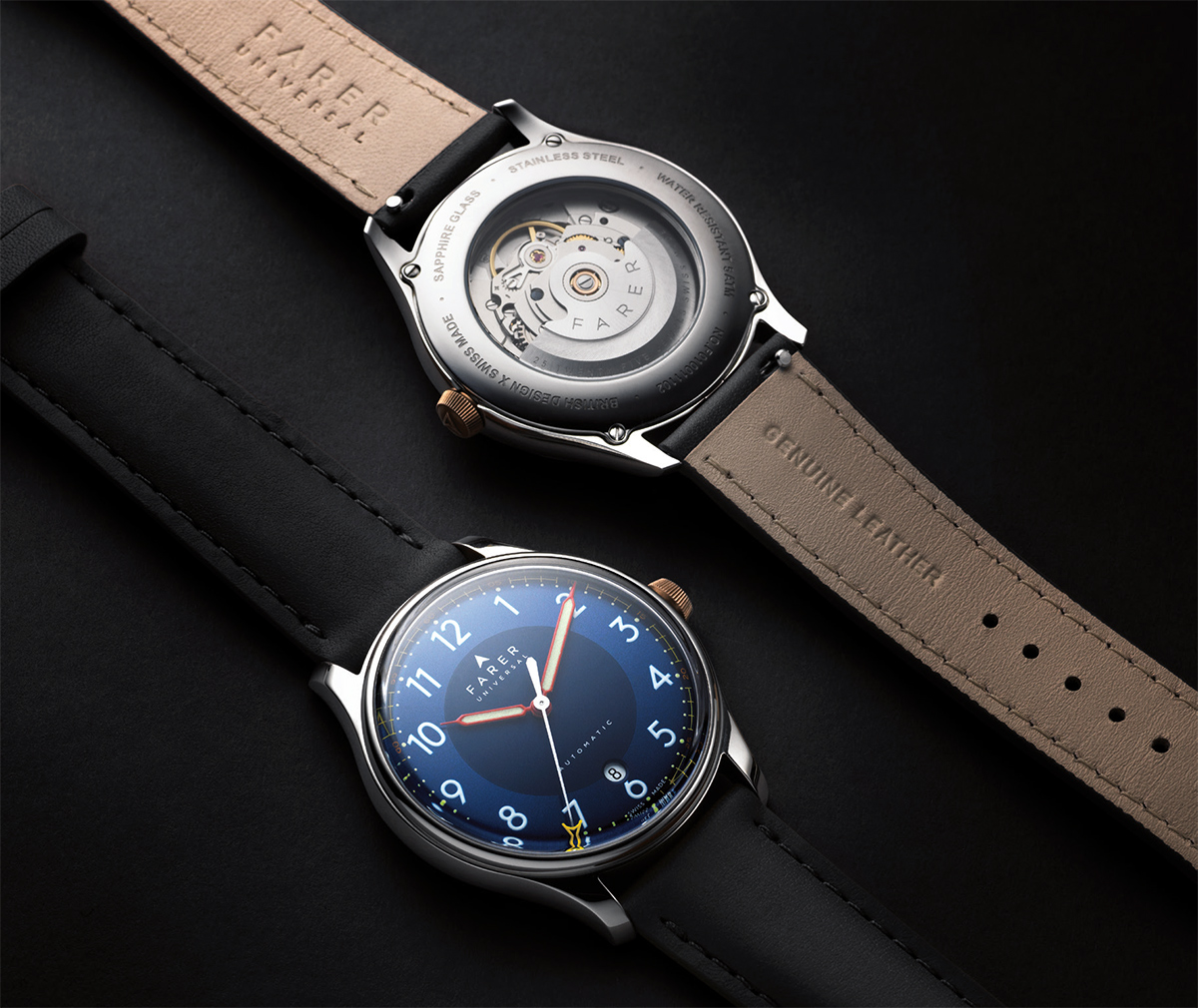 Among the new kids on the block, there’s Farer, which offers a handsome British look evocative of Jaguar XK120s and brogues, its watches featuring Swiss movements. With direct sales and sane prices, they offer a challenge to the popular Swiss models in the £500- £1,500 sector.

Just below Farer, Marloe Watch Company is also out to offer English panache and rock-bottom prices for mechanical watches. The handsome Cherwell retails for a mere £249, yet it houses a hand-wound calibre from Seagull – Chinese-made, but utterly dependable. Its forthcoming chronograph will delight the impoverished watch fancier, so keep your eyes peeled in November: it will probably sell out on announcement. 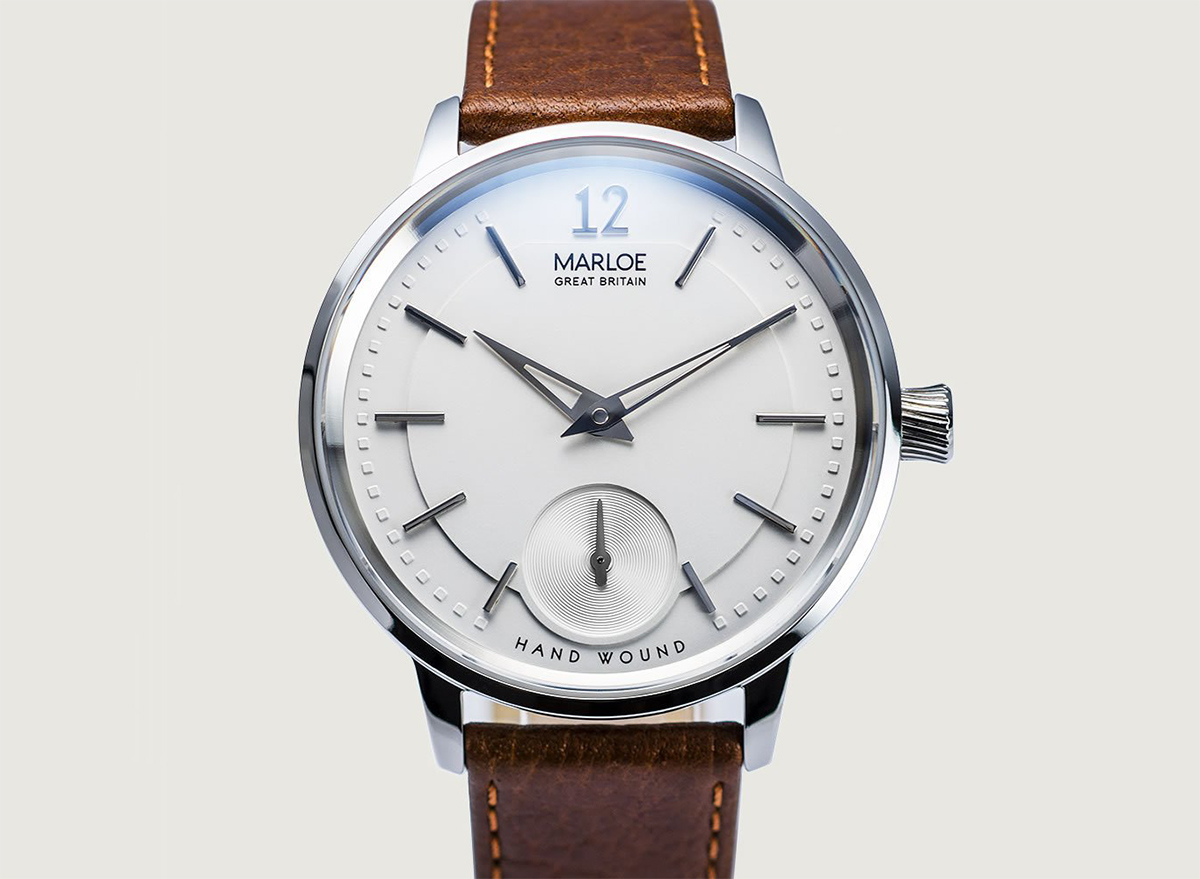 As feared, I haven’t answered the question of Britishness, despite my head and heart agreeing with Roger W. Smith that a truly British timepiece should be made, in its entirety, on British soil. But that would be to question the ethnicity of Vertex, celebrating its centenary with its rebirth after a half-century in limbo. One of the founders’ descendants of the company, a brand born in England as a distributor of Swiss timepieces, has revived it with an update of its most famous model.

Vertex was one of the “Dirty Dozen”, the mainly Swiss brands hired by the Ministry of Defence to produce the watches knows as “WWW”s, for Wrist Watch Waterproof. Now highly collectible, the watches of the Dirty Dozen couldn’t be more British, whatever the source of manufacture. 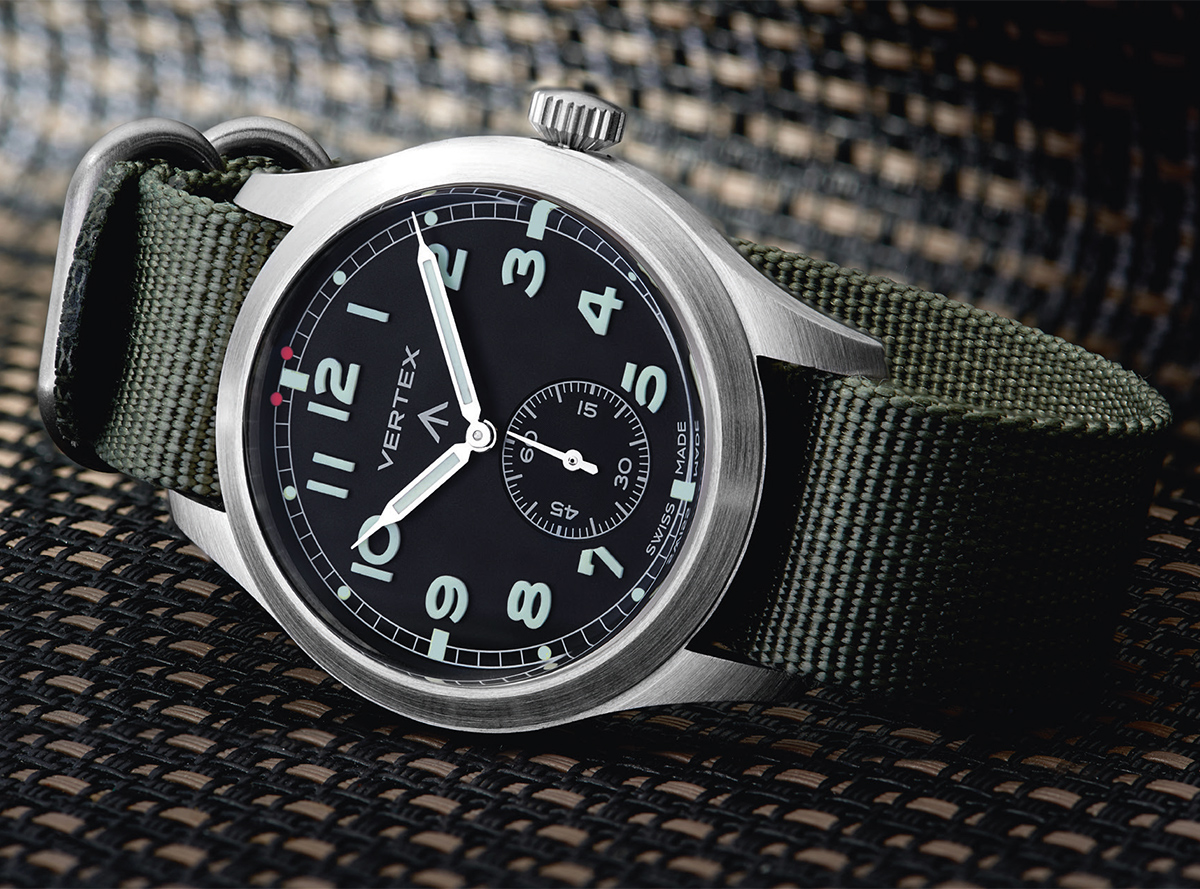 The new Vertex will only be available to those invited to purchase it; www.vertex-watches.com

With a unique conceit, the new Vertex will only be available to those who are invited to purchase it. It brings to mind that most British of institutions: the private club. Garrick may share its name with one, Bremont’s characterful boutique in Mayfair may seem like one, but Vertex’s clientele actually form one, an exclusive group lacking only a geographical centre. Then again, once upon a time, the sun never set on the Empire, either.

A dirty dozen inspired monopusher that pays tribute to one of the most daring raids of WWII and the...